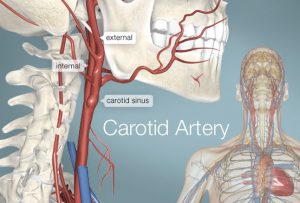 The foundations for cardiovascular disease in adults are laid in childhood and accelerated by the presence of obesity (as well as diabetes and high blood pressure).

Geetha Raghuveer, MD, a pediatric cardiologist at Children’s Mercy Hospital in Kanas City, MO, and an associate professor of pediatrics at the University of Missouri Kansas City School of Medicine, conducted a study a few years ago.

She and colleagues used ultrasound to measure the plaque in the carotid arteries of 70 obese children and teens, ages 6 to 19.

Like all arteries, the carotid arteries are made of three layers of tissue:

They measured the carotid artery intima–media thickness (CIMT) in the necks of these children and found that the average CIMT was 0.45 millimeters, which is typical of adults in their mid-40s!

The researchers weren’t surprised that the children had narrowing of their arteries, but finding 30 years’ worth of extra fatty buildup exposed the seriousness of the problem. The precocious buildup of fatty deposits (of clogged arteries) gave these kids a looming risk of stroke and heart attack and other health problems well beyond their years.

Another study was done in Canada (Dr. Kevin Harris, BC Children’s Hospital in Vancouver) with 63 obese participants, average age 13. All were given ultrasound tests of the heart and blood vessels that measure how fast blood flowed through the body. The results were abnormal for every child. Of special note to Dr. Harris and his team was the stiffness of the aorta in these children. He found that the aging process was accelerated in the aortas of all. And, just a reminder that the aorta is the body’s largest artery, which carries oxygen-rich blood to all the other arteries. 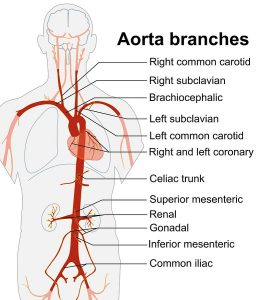 There are so many parents who are in absolute denial of their kids obesity. They see them as “normal” weight, and they look at them through rose-colored skinny lenses.

I applaud the idea of counting children’s vascular age, or the state or their arteries. Perhaps if this became a standard pediatric screening, it might help spur action against the ongoing epidemic of childhood obesity. Perhaps, instead of a pediatrician telling parents at their kids’ annual well visit that their child is obese, he should look them in the eyes and say, “Your child has the arteries of a 45-year-old.” Maybe THAT will bring it home for them.

Then, if they were truly worried about their obese kids, they’d move from being worried-sitting-on-the-couch to worried-getting-up-and-doing-something about it.

Then again, based on my experience with so many parents of overweight and obese kids . . . probably not.