The Childhood Obesity Blame Game:
Parents Are The Key! 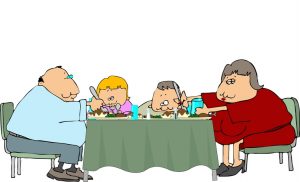 When you walk past an elementary school, or day camp, or food court at the mall, chances are that most of the kids you see are either overweight or obese.

What are parents of obese 8-10 year old kids thinking when their children are gorging on 1/2 pound burgers with onion rings and fries, massive amounts of sugary soda, super-boxes of candy, and buckets of movie popcorn slathered in butter?  Don’t they have even a moment’s concern or worry about the potentially life-threatening medical conditions that their kids will develop in the future — or way before! — if they continue to pile on fat?  Don’t they care about the emotional, psychological, and social effects that their children will have to bear? It’s not like these parents can say with a straight face, “Oh, I didn’t notice,” especially when they have an 8-10 year old kid weighing 100-125-150 pounds or more.  “My child’s pediatrician never said anything to me,” many say (and, truth be told, too often pediatricians don’t).  Oh, really?!  Well . . . get your kid a new pediatrician!

There are those who like to blame the usual suspects:  fast-food restaurants, the environment, genetics, desserts, aggressive marketing of junk foods to children, the lack of exercise in schools and the design of our cities.  All these factors, we are told by many, can be addressed through government action and policy, more and more social engineering, banning commercials or food items, taxing certain so called junk foods to make them more prohibitive. This is a fallacy.  It’s PARENTS who have the most important role in seeing that their kids eat right. PARENTS can’t be replaced by government policy when it comes to the physical and emotional health of their children.

If I asked the parents of an overweight child, “Would you be willing to mortally wound your son or daughter?,” they would probably be stunned. If I then said, “Well maybe not mortally wound them but enough to put them in a hospital for a few years?,” they would think I was crazy.  Yet . . . knowing full well the connection between obesity and deadly diseases such as heart disease, cancer, diabetes and fatty liver disease, not to mention the emotional aspects of being fat when you’re a kid — (socialization issues, early onset puberty, breasts in young boys and teens, low self esteem, and much more) — many parents still continue to actively feed their children or passively stand by while their kids eat themselves to illness and early death.

Kids don’t become obese overnight.  It takes years of parents GIVING their kids bad food habits.  So when parents notice their children storing a lot of fat, packing on the pounds, and they know that it’s not good, and even after this they encourage (or do not discourage) junk food and all the other habits making their kids fat, what is it if it’s not criminal negligence? Child abuse? What divine intervention do these parents need to make them start talking to their kids about the importance of good health? . . . to make them start putting into practice in their own lives the eating and lifestyle habits they want their kids to emulate?

If you’re an overweight or obese parent, do something about it.

If your kids are overweight or obese, do something about it.

Shame on you if you don’t.