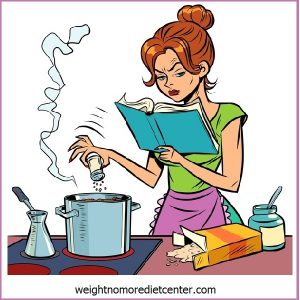 I am regularly searching for good and easy recipes to pass on to my clients.

They have to provide nutritional data (how many servings it yields, what a one-serving size is, and how many calories and fat each serving has) so that I can best conjugate that info into food groups.

An important factor in whether or not I will share a recipe with clients is a recipe’s reviews.

And it grinds my gears when I see snarky comments on a recipe or a negative review by someone who will write words to the effect of “I followed it exactly but” . . .

“I replaced sour cream with yogurt;” or

“Used canned tomatoes instead of chopped fresh tomatoes;” or

“I used egg whites instead of eggs;” or

“I didn’t have onions so I used leeks;” or

“I used a wooden spoon and bowl instead of an electric mixer;” or

“Instead of milk I used apple sauce;” or

“I swapped lemon for lime;” or

“I used the grill instead of the oven;” or

“I used melted butter instead of softened butter;” . . .

Sorry, girls and boys, but these folks did NOT follow the recipe exactly.

With their very first change, they owned it.

It was THEIR recipe. Not the author’s.

THEY failed the recipe. The recipe didn’t fail them.

One has to assume that a published recipe by a professional blogger or chef or well-established cooking/lifestyle web site has been tested. Therefore, it is incumbent upon us to follow the guidelines of that particular recipe exactly as it is written, including the called-for ingredients as well as the specific measurements. Even small substitutions like skim milk for 2% milk or milk chocolate for unsweetened chocolate or gluten-free flour for all-purpose flour can significantly alter a recipe. If the recipe author says to spoon and level the flour, for example, don’t use your own personal method of dipping and shaking or else you are going to pack too much flour into the cup. If an ingredient should be at room temperature, don’t use it straight out of the fridge.

So what does this have to do with weight loss and, specifically, with following my recipe exactly and doing my program exactly?

If you are following my recipe and doing my program, you are:

1 – Planning your daily menus for 2-3 days at a time exactly as I showed you at the outset. My recipe:

a – Date the top of the day’s column.

b – Using the numbers in the left-hand margin of the Weekly Menu Planner as your guide (as I showed you when we planned your first menu together), plan Dinner first, then evening Snack, then Breakfast, then Lunch, then your mid-morning and afternoon Snacks.

c – Write only one item at a time, with specificity (measurements and food item) and tally as you go so you can keep an accurate running record of what you’ve planned thus far and can easily see how much more you have to go.

d – Use a pencil with eraser so you have the option to change things easily and have a neat, easy-to-read record.

If you’re scrambling in the morning to plan the day, if you’re using pen because you’re so sure that the entire day will be planned perfectly without ANY need for tweaking as you go along and and then crossing out and using white-out and re-writing, if you’re planning an entire day and then going back to try and add everything up in the Totals box, if you’re subbing “Protein” and/or “Fruit” for “4 oz. Chicken” and/or “1 apple,” you’re not doing my program.

2 – Weighing your proteins. Use a counter-top food scale (an inexpensive, mechanical scale is just fine and they go into the dishwasher (unlike a digital) for a thorough clean and steam-sanitization). When you guess, when you eyeball, when you leave it to someone else and assume they are looking out for your best interests; when you tell me you’ve been doing dieting forever so you “know” what a portion looks like . . . you’re not doing my program.

3 – Measuring your vegetables. Use measuring cups and spoons. (Liquid and dry measuring cups are built differently to measure their ingredients in the most efficient and accurate manner. It does matter which one you use.) When you don’t use accuracy in measuring because (a) you’re lazy, (b) you think you know what a portion look like, or © you think there’s no such thing as “too many” vegetables, that they’re all “free,”, you’re not doing my program.

4 – Drinking the amount of water I’ve asked you to drink. More is OK, but less is not. So, if you’re consistently drinking less than was asked of you (excluding for medical reasons, of course), and rationalizing that coffee and tea is a good substitute for water, you’re not doing my program.

6 – Having 2-3 visits with us a week. Accountability: “Reporting in” at least twice a week. Responsibility: Making your visits a priority in your schedule. Commitment: Making appointments that you intend to keep. When you consistently break appointments after a bad weekend, when you pull a no-show, when you often call or email because you’re not sure what time your appointment is because you didn’t deem it important enough to put it in your calendar, choosing instead to say, “Don’t worry; I’ll remember. I keep all my appointments in my head.” . . . you’re not doing my program.

When it comes to a recipe, if you sub an ingredient (or more than one), alter the proportions, or use your own technique or some other variation in form or setting and the recipe doesn’t work out for you, it’s your fault. Got it?

When it comes to this program, if you cherry-pick the parts you want to do vs. those you don’t; when you substitute some of the tools I want you to use in favor of your own or omit them altogether, when you weigh and measure half-ass because you think you know it all, or use your own technique entirely, and you don’t have weight loss as often or as consistently as you want, it’s your fault. Got it?

Those who want a successful outcome follow the recipe exactly. No substitutions. No alterations.

Anything OTHER THAN what I am asking you to do in the manner that I am showing you how to do it, is your program, not mine. Got it?

Changing my recipe makes it yours.