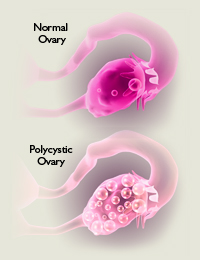 In the simplest terms, PCOS is a health condition linked with both hormone imbalance and insulin resistance. It is the most common hormonal and reproductive problem affecting women of child-bearing age.

Defining the Condition.  The hormones involved in controlling periods, and ultimately reproduction, are produced in the pituitary gland located in the brain. In PCOS two of these hormones, luteinising hormone (LH) and follicle stimulating hormone (FSH) are produced in proportions that are off kilter. The imbalance of these two hormones prevent the follicles in the ovary from developing properly. They tend to remain small and don’t mature enough to release an egg. As a result, a string of small follicles forms on the ovary, giving rise to the characteristic polycystic ovary.

What is a follicle? A follicle is the egg-containing structure in the ovary, one of which should grow monthly to release an egg (ovulate).

The most common PCOS symptoms include the following:

All human beings have both female and male hormones. The dominant “female” hormone is estrogen. The dominant male hormone is testosterone. These hormones need to be balanced in our bodies. Polycystic ovaries contribute to the hormonal imbalance because if the ovaries aren’t working correctly, they aren’t releasing enough estrogen into your blood stream, but they are increasing production of male hormones (collectively called “androgens”), namely testosterone. This is responsible for such symptoms as acne, facial hair growth and irregular periods, and a host of other symptoms. An endocrinologist, who specializes in the hormone field, works with a PCOS patient to get hormones balanced.

Insulin resistance is the root of most symptoms of PCOS.  It is a condition in which your body “resists” the normal actions of the hormone insulin, and this is where diet and eating lifestyle is critical. Before we even start talking about diet, it’s really important to first understand what insulin resistance is and how carbohydrates affect it.

INSULIN is a hormone whose job it is to regulate the level of sugar in your blood.  Every time you eat foods that contain carbohydrates, your blood sugar (also known as glucose) rises.  As the blood sugar level rises, your brain sends a signal to your pancreas to release insulin.  Normally, insulin’s job is to move glucose from your bloodstream into the cells of your body. That’s how you get your energy.

So far, then, we understand that:

Why does this insulin discussion concern you? Most women with PCOS have severe insulin resistance. Insulin resistance is, as stated above, a condition in which the body resists the normal actions of the insulin — meaning that your body’s response to insulin is defective or broken.  Because of this defect, there’s still a certain amount of sugar in your blood that’s not moved to your cells, and because there’s still sugar in your blood, your brain is still sending signals to your pancreas to release insulin and, because of that, your body releases more and more insulin in an attempt to get that sugar out of your blood stream. Any remaining glucose that is not moved by the insulin out of your blood and into your cells is stored as fat. The more insulin your have in your blood, the more fat will be stored.

OK, so now we know the following:

You might have the following question: How does my body know how much insulin to release? The amount of insulin released by your pancreas is based on two factors:

Since carbohydrates play such a vital role in as relates to PCOS, let’s make sure you understand a little about them.

CARBOHYDRATES are the primary source of fuel (or energy) for our bodies — and in particular, our brains. After digestion, almost all carbohydrates end up in your blood as glucose, and a whopping 75% of all the glucose that circulates in your blood is used by your brain!

The more often your body experiences a high level of insulin, the more difficult it becomes for that insulin to lower your blood sugar. The pancreas tries to compensate for this by releasing even more insulin.

The more “fast sugar” food you eat, the more insulin your body will produce, and, as a result, you become caught in a vicious circle of higher insulin production (called hyperinsulinemia) and reduced insulin sensitivity (called insulin resistance). When this happens, your insulin level remains high constantly, whether you have eaten or not.

At this point you should clearly see that the more stable your blood sugar, the greater ability you have to lose weight (and keep it off!) and a better hormonal balance in your body. Fat cells depend exclusively on sugar, so keeping your blood sugar levels stable deprives them of their one and only food source!

1.  Cold Cereal.  If you eat cold breakfast cereal, cereals that are minimally processed and unsweetened are best. Those that are high in fiber and have no added sugar are ideal. All-Bran is a very good example. Bottom line: Look for unsweetened, whole-wheat or whole-grain cereals without dried fruit.

2.  Hot Cereal.  If you enjoy hot oatmeal, avoid  “instant.” Only use the old-fashioned, slow cooked oats for oatmeal.

3.  Bread.  The finer the flour, the quicker blood sugar and insulin will rise after it is eaten. Try to incorporate into your diet coarse-like “whole grain” bread.  A slice or a loaf will feel heavier in your hand because whole grains weigh more than fine flour. When shopping for wheat bread, you want, whenever possible, “100% stone-ground whole grain” or “whole grain.” (Rye and barley are better than wheat, but 100% stone-ground whole grain is fine.) “Whole grains” are better for you because whole grains contain lots of insoluble fiber, which increases the volume of the food you eat and gives you a fuller feeling for a longer period of time.

4.  Rice.   If you eat rice, opt for long-grain basmati rice or “par-boiled” long-grain American rice, even it’s white.  Short-grained, sticky Asian (jasmine and sushi) rice has a very high glycemic effect (which means the carbohydrates will rapidly raise your blood sugar) and should be avoided. Long-grain basmati rice is a better choice. “Parboiled” long-grain American rice is also good because it is steamed before being processed, so it is less sticky.  As a rule: The stickier the rice after it has been cooked, the higher the glycemic effect. Brown rice doesn’t have a very low glycemic effect, but it is rich in fiber so it’s a good choice. Best choices: brown basmati, “par-boiled” long-grain wild or white rice.

5.  As often as possible, your snacks and meals should consist of a protein or diary along with a fruit, vegetable or grain. Examples: a yogurt with an apple; a piece of cheese with a piece of fruit or a vegetable; tuna salad spread on celery sticks; an omelet with spinach, a Wasa cracker with egg salad.  Eating this way will enhance your body’s ability to burn fat and satisfy your appetite far better and longer.

6.  Eat only lean meats, and only skinless poultry.

7.  Have fish in your diet 2-3x a week, including both low-fat white fish and shell fish (Tilapia, flounder, sole, shrimp, lobster) and the darker, fattier fish that has healthy omega-3 fats that you need (salmon, tuna, mackerel).

8.  Incorporate beans and eggs into your diet. Both are low in calories, and beans are an excellent source of fiber. Fiber slows down the absorption of sugar, for one thing; for another, it’s vital for healthy, regular bowel movement.

9.  Avoid products as often as possible that contain sucrose (table sugar, glucose, corn syrup, and honey [and honey contains glucose, fructose and sucrose]); molasses, golden syrup and maltose (maltose is the kind of sugar that is found in beer).

10. Try to incorporate lemon and lime juice and other citrus fruits, as well as vinegars, into your diet. The acid in these items slows down the absorption of carbohydrates. Try to use them in salad dressings; with fish, chicken and meat; with grilled and roasted vegetables; in sauces; and in fruit salads.

There is no cure for PCOS.  Once you’ve been diagnosed, regardless of how young that might be, you’ll have it for the rest of your life. Suffice it to say, if you have PCOS, maintaining a slim, healthy weight is crucial. Weight loss in obese and infertile women is associated with more spontaneous pregnancies and a decrease in pregnancy complications. In anovulatory women with polycystic ovary syndrome, loss of intra-abdominal fat is associated with resumption of ovulation.