Obesity: Where is it Driving Us? 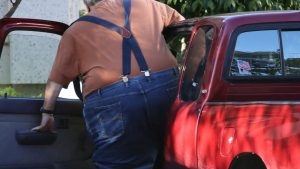 Driver behavior and driver health can have a serious impact on the lives of drivers, their passengers and the motorists and pedestrians around them. I’ll bet most of you have never considered that obese people are not as safe behind the wheel.

I’ll bet you have never considered that obese people are not as safe behind the wheel. There are two reasons for this.

Obese people have a body structure different than the standard used in designing cars, and their interactions with the safety features, such as seat belts and air bags, most often do not occur as intended.

A seatbelt works best when the belt rests close to the bone in your shoulder and in your pelvis, tight across the collarbone and low across the hip. The seatbelt holds obese drivers (and passengers) slightly differently and might not apply restriction the same way on hips and shoulders as it does for a normal weight individual. Additionally, if the seatbelt isn’t long enough, the person isn’t going to wear it, which is an increased risk. Often, obese drivers fail to use a seat belt at all.

People who are obese often have other underlying health issues that contribute to them doing poorly if they have an accident. It’s no wonder, then, that as obesity is rampant, so too is medically diagnosed obstructive sleep apnea, a chronic disorder that interrupts sleep and causes extreme daytime sleepiness and fatigue. In the year 2000 alone (as per a study published in 2012 in the Journal of Transportation Safety & Security) 800,000 obese drivers in America with Obstructive Sleep Apnea were involved in illness-related car accidents.

As per a study from the UC Berkeley’s Safe Transportation and Research Education Center (SafeTREC), obese drivers are up to 78% more likely to die in a car crash than normal-weight drivers. Let that number sink in.

In addition to sleep apnea, there are other obesity-related medical issues to worry about: diabetic neuropathy can in no small measure affect a person’s driving skills; and an obesity-increased risk of spontaneous cardiac attack or stroke while driving can have catastrophic results.

If you hesitate to let your children be passengers in the car of a morbidly obese adult — especially one with sleep apnea, cardiac issues or diabetes — you are NOT being overcautious.

And if you don’t hesitate, perhaps you should.