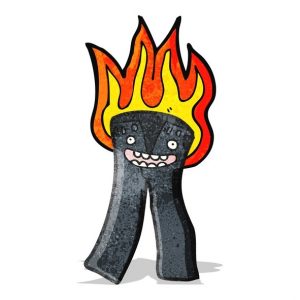 Recently, a 17-year old client who lives 10 minutes away and had a 9:00 a.m. appointment, called the office at 9:05 to say there was a big car accident one block up (on a well-traveled road) from my office, and that’s why he was running late but that he’d be there shortly. About 10 minutes later, the door opens and as he enters the waiting room I hear him pronounce to my colleague, “I’m so sorry I’m late. There was such a terrible accident on Monmouth Road. I couldn’t help it.”

After weighing him, he sat down next to my desk, and I looked him straight in the eye and told him he was lying. He looked at me like a deer in the headlights. Now, aside from the fact that I’ve got decades of wisdom and experience and can smell bullshit a mile away, I said, “_____, don’t you think if there was a “such a terrible” accident just up the road from this office, we would know about it, that there’d have been the wailing sirens of an ambulance and police cars? That the road ahead would be blocked and there’d be a cop directing traffic just outside my office, steering people away from heading in that direction?”

Surprised at being called out, he apologized. The real reason he was late stemmed from the fact that he and a group of friends, to make some money over the summer, started a personal car-wash/wax-shine in the driveway of his house. A customer was late in getting to their appointment, which made my client late for his. When I told him that the truth was so simple in this case, that he had a good reason to be late and that all he had to do was tell the truth at his initial call . . . he apologized again.

This is a case of someone who is already, at a young age, so accustomed to lying even when there is no clear purpose . . . and about unimportant things. It is not a sign of good things to come for him. He is likely to have a problem that will eventually cause him real relationship, career, financial or legal troubles.

Two mornings later, same kid gets on the scale and shows a 4-lb. weight gain. His food diary showed that he had under-eaten the last two days in more than one food group. He told me his sister had gotten engaged, followed by lots of hustle-and-bustle at their home, including his parents hosting over 100 people at their house the night before to celebrate the engagement, so his days didn’t go as perfectly as he had planned. My liar antennae was up, but I only reminded him how/why under-eating slows the metabolism, and asked him to get back on track.

He left my office but his dad, who was in the waiting room, popped his head in to wish me a good weekend, and when I congratulated him and his wife on the engagement of their daughter, he said, “Did my son tell you about all the desserts he ate last night?” I would not betray the conversation his son (nor the lie and conversation of two days prior), so I just looked at him and smiled.

That evening, after these two encounters with this client over a few days, I paused to think about how many clients lie on a regular basis. Most, I’m happy to say, do not . . . they own up when they screw up, but too many do not.

A client will have a significant weight gain. They will show me a perfect food diary—so meticulously planned, and written in ink because they were so sure there’d be no need to erase/change anything, a work of art in both content and penmanship. They’ll step off the scale and say, “Impossible. I was perfect;” or, “How can that be? My home scale showed a 2 pound loss.”

In asking lots of questions to get details, they often contradict themselves which forces the client into admitting dishonesty. We then, together, start adding to their “perfect diary” the things they didn’t write—the things they actually ate vs. what they intended: the times they ate out or ordered in, the times they didn’t use any portion control, the “handful” of nuts, the “few” chips, the “finished my daughter’s mac ‘n cheese” . . . and you get the idea.

A client will consistently cancel a Monday appointment: “I have to work late;” “I have to go into work earlier;” “My kid’s home sick from school;” “I’m not feeling well;” “I have a repairman coming this morning;” “I have to bring my car in;” “I forgot I have a dentist appointment.” It’s endless.

For the client, each of these lies is a one-off: they spew it and forget it. In my business, however, we keep meticulous notes of client sessions as well as cancellations and reasons given. So, after numerous of these occasions, first I show them the irrefutable pattern, and then I tell them what the truth is: They had bad weekends and wanted a few more days to try and lose the weight they know they gained.

An article about lying clients wouldn’t be complete without addressing the most common reaction from those who just dig-in to their lies:  “I paid you all this money; why would I lie to you?”

You lie to me because telling the truth feels like giving up control.

You lie to me because you don’t want to disappoint me.

You lie to me because you’re ashamed that you’re failing at the attempt.

You lie to me because it’s easier to blame me than accept responsibility.

You lie to me to avoid accountability.

You lie to me to avoid making difficult changes.

You lie to me to feel better about your behavior.

You lie to me because ‘it’ isn’t a lie to you; you believe it.

You lie to me because you want it to be true.

You lie to me to keep from acknowledging a truth about yourself.

You lie to me because you carry a burden of guilt.

You lie to me because you’ve been doing it for so long when it comes to your weight loss attempts that it’s second nature to you . . . a learned behavior . . . it’s rote response . . . and no one has called you out on it until today.

“If you want to be successful, you must respect one rule: Never lie to yourself.” ~ Paul Coehlo

To lie to yourself is always counter-productive — like deliberately shooting yourself in the foot or taking a fork and plunging it into your own eyes. I guess that’s why it’s easier for clients to lie to me: it’s less painful to them.