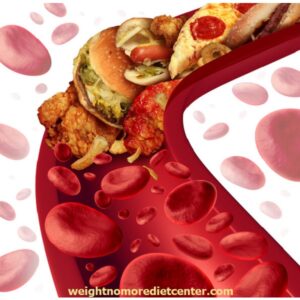 So, have you always thought there’s an exception when it comes to indulging in “just one” fatty meal? That the health ramifications associated with fast food meals high in saturated fat and sodium only take effect “down the road?”

Wrong! The consequences of eating your combo meal begin almost immediately after you crumble the wrapper of your eaten burger. Every time you enter a fast food restaurant, you exit a little unhealthier (and a little less attractive). And ordering a DIET soda with hamburger and fries or onion rings doesn’t make it a “diet” meal.

Contrary to what most people think, it’s not just long-term consumption of junk food that clogs arteries. Damage to the arteries actually occurs within only a matter of hours after just one – that’s right, one –  fast food meal!

In 2012, researchers from the University of Calgary found that the arteries of their study participants (20 healthy male non-smoking university students) dilated 24% less after a junk food meal breakfast: an egg and sausage sandwich, a slice of cheese and hash browns.(1) Their findings provided evidence that endothelial function (the ability of the blood vessels to dilate) declines after consuming only one junk food meal!  With that in mind, can you imagine the arterial damage from consistently consuming high-fat foods or from long term obesity?

Additionally, a few years before the Calgary study, to see what effect eating this food would have on our bodies, other than the obvious impact on our waistlines, ABC News sent one of its reporters (de Nies) and a news producer (Garcia) to a lab at the University of Maryland Medical Center.  There, they had their blood vessels tested both before and after they both ate a three course lunch, each consuming over 6,000 calories and 187 grams of fat: a deep-fried macaroni and cheese appetizer from The Cheesecake Factory, an Applebee’s bacon cheeseburger, and a giant cookie smothered in ice cream from Uno Chicago Grill.  Two hours later, lab tests showed their blood discolored with fat chugging through their veins. Additionally, using sensors, they were able to actually hear the narrowing of the arteries and the struggle to keep blood flowing — proving how one meal does affect the health of our arteries.

This ABC News crew’s video report shows you the before-and-after blood vials from these two ABC News employees.(2) You can see for yourself the thick fat in the blood.  While I would recommend that everyone take a look at this for the lessons learned, if you are overweight or obese and your lifestyle is comprised of too many of these kinds of meals, it is especially important viewing.  The fat-filled blood vials of these two individuals after only just one meal are also yours . . . all the time, one meal after the other. And if you’re a parent of an overweight or obese child, keep in mind that those fat-filled blood vials would show the same for your kids. Because so many children are obese, with their blood vessels in a perpetual fat-filled state, obese children are more and more showing signs of heart disease typically seen in middle-aged adults.

Forward to three weeks later.  Same restaurants, but consuming a lighter lunch containing about 1,000 calories and three grams of saturated fat.  Again, as with the first experiment, de Nies and Garcia had their bloods drawn before and after lunch.

When lab technicians tested Garcia’s blood two hours after his meal, there was almost no discernible change in the amount of fat in his blood stream from the sample taken before the meal.  As for de Nies, who chose a salmon entree, not only was her blood clear of fat, but her arteries were actually more expanded and healthier after she’d eaten than they were before.  (If you want to see the blood test results, see their second very short ABC News report video below.)(3)

This is not a beat-up on fast food establishments, drive-thru’s or otherwise; eating out at restaurants can be just as bad — and worse in one respect:  When people eat out at restaurants, they have more time, it’s more relaxing and leisurely, it’s more like a social event, so they’re less cautious about overeating.  And be assured, even in a ‘better’ restaurant, you’re packing in the calories, sodium and fat.  It’s just as easy to eat 2,000 or more ‘bad’ calories in one meal at a fine restaurant as it is in a fast food place.

Of course, we have to be realistic.  I don’t think any of us can say that for the rest of our lives we will never have a junk food meal, either at a drive-thru, a restaurant, at the circus, at a tail gate, at a block party or other special event.  But, you have to use good judgment.  You’re not obligated to eat the whole portion served, so if you cannot share it with someone, leave some over; do not bring it home to finish tomorrow.

The takeaway:  A single junk food meal — composed mainly of saturated fat — whether served in a paper bag or served to you table side, is detrimental to the health of your arteries. High-fat meals constrict arteries for hours, reducing blood flow; fat globules clog the blood vessels, making it harder for the heart to pump blood.

Even one episode of eating something unhealthy has a proven negative effect that you can see.  Close your eyes and visualize fat going directly into your bloodstream.  Think before you eat.  Ask yourself:  What’s this doing to my blood vessels over a period of time?  Every meal does matter.

(2) How Bad Are America’s Unhealthiest Meals?

(3) You Are What You Eat: How Fat Affects Your Bloodstream