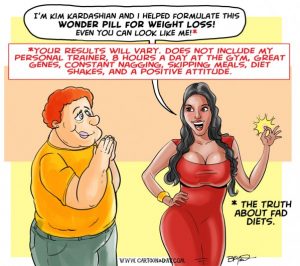 Every now and then I like to remind everyone that foolish, fad diets aren’t new to modern times. I’ve previously written about The Candy Diet, The Cigarette Diet, The Tapeworm Diet, and the Fruit Salt Pills & Bands; Reducing Soap; Bile Beans and Fat Girls Diets.

It’s time to go back into the vault of dumb, dopey and dangerous diets. 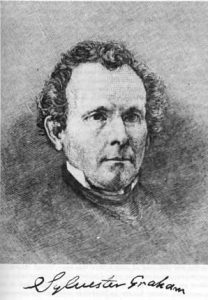 Now, although this one was not for weight loss, The Grahamite Diet was a fad diet nonetheless.  In the 1830’s, a Presbyterian minister named Sylvester Graham decided to cure physical lust with Graham flour (which was also used to make the original crackers that he created and still bear his name). He preached that spices, stimulants and other over-indulgences lead to indigestion, illness, sexual excess and civil disorder. His followers (yes, he actually had followers) were known as “Grahamites,” who subsisted off of bread made from coarse graham flour, vegetables, and water.  Graham believed that his vegetarian diet would prevent masturbation—which he regarded as an evil that he thought caused blindness, disease, and inevitably led to insanity and death.

He died in 1851 at the young age of 55—no doubt because he hadn’t had sex, either with a human or his own hand, in decades.

For those of you who may be Graham Crackers lovers, have you noticed a lowering of your libido? 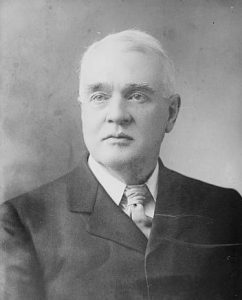 In 1903, Horace Fletcher was an unknown, overweight San Francisco art dealer. His life changed when he was denied health insurance due to his weight.  He dropped 40 pounds and became a diet guru.  His secret?  Take a bite, chew it 32 times (one chew per the average number of teeth in an adult mouth), and then spit it out. Nicknamed “The Great Masticator,” the so-called public relations genius coined the phrase “Nature will castigate those who don’t masticate.” Known as Fletcherism (or Fletcherizing), his bizarre chewing fad attracted plenty of famous followers at the time. 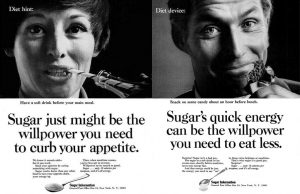 There was a time, going back to the 1950’s, where the sugar industry fought for decades to promote the “health benefits” of sugar, even touting sugar as a diet aid, one ad claiming “sugar can be the willpower to under-eat.”

For more on this, here’s a great read: 8 Insane Vintage Ads That Make Sugar Seem Like A Health Food. You’ll see several print ads; my favorite is from a 1970 issue of LIFE magazine, encouraging sugar to help with that “fat time of day.”

Leave it to the French.

Despite the popular notion that all French women are naturally slender, they are just as obsessed with dieting as the rest of the world.  The February 2010 issue of French women’s magazine Grazia advocated “The Air Diet”. Here’s the original article (in French).

With a big-splash public relations campaign created by Dolce & Gabbana and featuring celebrities like Madonna, “L’Air Fooding” involved the work of eating — preparing food, putting it on a plate, placing it on a fork or spoon, lifting it to your lips — but without the actual pleasure of, you know . . . eating it.

We here in America call it by its proper name . . . ANOREXIA.

Losing weight has always — and will always — require hard work.