Fat Kids: The Role of Parents and Pediatricians 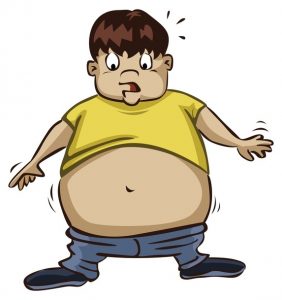 Despite widespread publicity about the obesity epidemic in children — everywhere you look you see fat kids — parents increasingly are willfully suffering from fat blindness:  turning a blind eye as their children pack on the pounds.  A study done a couple years ago found that more than three quarters of parents of pre-school-age obese sons and nearly 70% of parents of obese daughters described their children as “about the right weight.”  Perhaps this is hard to believe for many of you, but I can vouch for those high percentages because I deal with the result of those once “pre-school-age obese sons and daughters” who grew into the obese adolescents, tweens, teens and young adults who are now my clients.

Often — too often — parents, especially those (and most of them are) who are obese, don’t want to acknowledge their son’s or daughter’s weight issue because to help their child means change . . . and  change means a lot of work for them.  In addition to suffering with ‘elective’ fat blindness about their children, they also see themselves as ‘normal’ weight because too often their friends and family are also obese, so being fat is ‘normal.’ (I wrote more specifically about this in a recent blog, Are Your Friends Making You Fat?)

For many of these obese parents, I’m usually the first one to hit them upside the head with the truth they’ve been intentionally denying when it comes to their child’s weight. Here’s an almost verbatim description of how a conversation starts with the obese parent of an obese kid when I meet them for the first time, keeping in mind that I’ve first spent some private time with the kid; then I excuse him or her and meet with the parent for some private time before convening them both for the consultation:

Me:  I’m sure the pediatrician would be happy: 15-20 pounds off is better than on, but your pediatrician is not giving it to you straight.  The totality of what your son needs to lose in order to be at a healthy weight and to have the best chance of keeping it off forever is to lose 70 pounds . . . and that’s now, today.  Keep putting if off, and that 70 will grow to 80, 90 and beyond.  Again, your son is OBESE, Mrs. Smith.  Did the pediatrician ever use the word ‘obese’ to describe your son?

Me:  To your knowledge, did the pediatrician ever talk to your son privately, as I just did, about how he feels about being fat and about having breasts?

Me:  Did the pediatrician ever talk to you privately about his concern for your son’s weight and the fact that your son has breasts and the emotional, psychological toll that takes on a boy?

Me:  When your son was ‘only’ 20 pounds overweight, did your pediatrician suggest you do something about it?

Me:  How ‘bout when your son was 40 pounds overweight?  Did he  recommend you do something about your son’s weight then?

Mrs. Smith:  Nothing specific, other than to eat less and be more active.

Me:  Did you ever consider getting a new pediatrician, Mrs. Smith, or was it easier for you and your husband to stick with the diagnosis you weren’t getting so you wouldn’t have to acknowledge, discuss or work to change it?

Me:  You do, realize, Mrs. Smith, that you and your husband are responsible for your son’s obesity, right?

This is usually where one of two things happen:

Oh boy, I love that question; I really do because I’m armed and ready to respond with, “I’m the person who is telling you what you should have been told long ago when your kid first starting gaining weight, when he first grew into the obesity weight class, what your neighbors and parents at school are thinking when they see your kid playing in the cul-de-sac or in the schoolyard and they “tsk tsk” to each other and whisper among themselves, “What a shame . . . why don’t they DO something about their son’s weight?”

Parents are 100% responsible for the environment in which they raise their children, and especially so when it comes to instilling and encouraging good eating (and exercise) habits that can last a lifetime.  However, if there’s one other very important person in a child’s life, it’s the pediatrician. This is the person who sees kids annually for school-required physicals, in addition to the usual sick visits, scraped knees and the like.  This is the one person who has a huge responsibility, in my opinion, to play a role in whether or not a child stands a good chance to be slim and healthy.

I know that pediatricians are very busy. I don’t expect them to sit down with every parent of every patient for an in-depth conversation on the biology and science of fat cells, how they grow, what they look like, how they affect the metabolism, why they need to get slim to stay slim and that “just” losing 20 pounds isn’t enough when their child is 70 pounds overweight, etc. I, however, do that with every parent . . . but, by that time their kid is already obese. Pediatricians need to play a role in preventing obesity to the extent they can, by being candid with a parent as soon as they see a child’s weight is not synced with their height. A pediatrician should engage a parent with honesty, candor and concern and immediately strike down a parent’s common wishful thinking that their now slightly-overweight child will “grow out of it” as they age and get taller. They won’t. Without change, they’ll get taller . . . and fatter.

. . . and you know what else pediatricians need to do?  They need to follow whatever advice they give.

. . . and you know why I think many of them don’t bring up a child’s weight issues to a parent until it’s so out of control and they can no longer get away with not speaking up about it?  Because very often they are conscious of their own fat bodies:  How on earth, they might ask themselves, can they bring up a very sensitive issue to perhaps a very defensive parent, when all that parent has to do is look at the pediatrician and see that whatever guidance he or she may give to the parent they themselves don’t follow?  Isn’t that like going to a dentist with 10 teeth in his mouth who might attempt a conversation with a parent about the importance of good oral health?  I’d laugh in that guy’s face.

Uphold that part of the Hippocratic Oath* that states:

“I will prevent disease whenever I can, for prevention is preferable to cure.”

Preventing fires is easier than putting them out.

If you see something, say something: Talk to parents as soon as their kids are overweight as well as at every yearly physical.  Document those conversations in your patients’ medical charts to record the fact that you’ve done your part.  I would also suggest, as I did with my own daughter when she was 12, that when a kid is a little older, perhaps as they are approaching puberty or just after, speak with them privately: Let them know you are their physician, that as they continue to age and their bodies change, if they have any questions, concerns or fears, you are there to listen and to keep your conversations confidential.  In other words, encourage a relationship that that young person can rely on to share how they are feeling about themselves, and if and when they confide in you about their over-weight —how they feel, how it affects them, whether anyone at school or elsewhere bothers them about it, etc. (and believe me, these are the things that too often overweight and obese kids do NOT want to initially bring to the attention of their obese parents because they do not feel they will get the guidance or support they need to make changes) — let that be the catalyst to approach the parent(s).  Your training and professionalism will guide you in how to open that dialogue with a parent without betraying the confidence of your patient. Needless to say, if you’re very overweight or obese yourself, lose weight: You’ll not only be better able to meet the challenge of a parent conversation head-on with the advantage of personal experience, but you’ll be more inclined to initiate it.

Express your love to your children in ways that don’t condemn them to a lifetime obesity battle and chronic disease. How they learn to eat now will affect their health for years to come.

I’m not into the P.C. B.S. approach to dealing with parents about their kids’ obesity . . . or their own. I’ll tell them what they must hear and what pediatricians oftentimes won’t.

Parents need to stop being ignorant, arrogant or just plain stupid. If they don’t, they need to at least start acknowledging what they absolutely are doing: killing their kids . . . S L O W L Y.

*Part of the modern version of the Hippocratic Oath, written in 1964 by Louis Lasagna, Academic Dean of the School of Medicine at Tufts University, and used in many medical schools today.