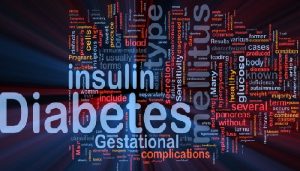 I know diabetes is not exactly a barn-burner of a topic, but it is especially prevalent in overweight and obese people, which is how I come in contact with that issue regularly. At a time when the number of obese people in the world now outnumber the underweight, and since obesity changes your DNA, which increases the risk of diabetes for your offspring, it’s a good time to revisit the subject.

Now, I’m sure you’ve heard of the two major forms of diabetes:

Both types share one central feature: The cells of your body do not absorb enough insulin.  This results in high sugar in your blood . . . high, because it’s not removed from the blood.

Here’s the normal process when it comes to eating/digestion/insulin control. 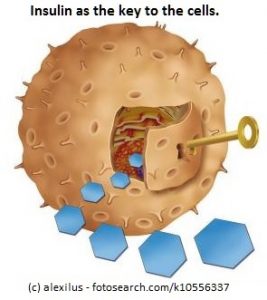 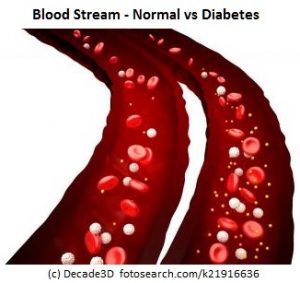 If you don’t lose weight, and if you gain more (and most do), eventually you will cross the line from taking pills to having to give yourself insulin injections.  At that point, even with weight loss, there’s almost always no going back to the pills.

I want to ask you again to visualize something for a moment:

See in front of you a pile of sugar next to a pile of rock salt . . . you know, that white salt that is sprayed along the roads in the winter in preparation for a snow storm.  Well . . . the white sugar does to your strong blood vessels what that rock salt does to our nicely paved roads: It literally eats away at the insides of the veins, thereby weakening their structure. (This is why inevitably we see roads being re-paved every spring to fix the potholes created over the winter months.)

Just as roadways become weaker over the course of a winter and eventually cave into pot holes, veins that are weak . . . leak! And, since our entire anatomy consists of veins (arteries, capillaries), our entire vascular structure is weakened.  A weakened vascular structure affects all the organs of your body from your eyeballs (leads to diabetic retinopathy, changes in vision) to your skin (for slow-healing wounds or sores); from your gums (weakened blood vessels lead to greater susceptibility to gum infections and periodontal disease); right down to your fingers and toes (leading to neuropathy: numbness or tingling in hands and feet) . . . and much more.

Weaker veins is also a major reason why surgery for overweight and obese people is always more problematic because the weaker the veins the more bleeding there is. (A great example of weak veins that leak are varicose veins.)

If you’re overweight or obese, you already have a slow metabolism . . . and a person with a slow metabolism gains more weight . . . faster. But, if you’re also either insulin resistant or diabetic, and you understand, as I said earlier, that insulin is a key regulator of the body’s metabolism . . . then you understand that being overweight increases your body’s resistance to what insulin tries to do: namely, remove excess sugar from the blood.  And when you have that problem, excess sugar backs up in the blood, excess insulin backs up in the blood, and both excess sugar and excess insulin in your blood are stored as fat.

The best defense against becoming diabetic is to maintain a healthy weight.

The best defense against complications for diabetics is also to maintain a healthy weight which, in turn, gives them a greater ability to maintain healthy blood sugar levels.