Are You Losing Sleep and Gaining Weight? 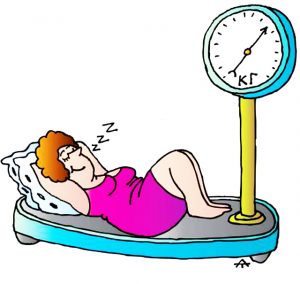 Sleep services all aspects of our bodies in one way or another: molecular, energy balance, as well as intellectual function, alertness and mood. There is not a single tissue in the body that is not beneficially affected by sleep. It’s the single most effective thing we can do every day to reset the health of our brains and bodies. Sleep helps us to think more clearly, have quicker reflexes and focus better. When we’re tired, we just can’t function at our best. The fact is, well-rested people operate at a different level than people trying to get by on 1 or 2 hours less nightly sleep.

A study done by Dr. Qian Xiao, Division of Cancer Epidemiology and Genetics, National Cancer Institute in Maryland, found that the less sleep men and women got the more weight they gained. Those who slept for six hours or less per night gained more weight than those who slept seven to eight hours. Even more alarming was what happened to the normal-weight men and women who reported sleeping less than five hours each night: They were 30% more likely to gain 11 pounds or more compared with those who slept seven to eight hours and about 40% more likely to become obese during follow-up.

The findings are particularly powerful because the Dr. Xiao and his team followed patients’ weight gain over a 7-1/2 year period and because of the large size and diversity of the study population. The association between lack of sleep and weight gain was consistent no matter what the subject’s age, educational level, smoking status, BMI, and physical activity level. With more than 80,000 people in the study, it’s more than likely that the sleep deprivation/weight gain connection exists for just about everyone.

So, how is sleep connected to weight gain?

People who don’t get enough sleep (7 at least, 8 or 9 is better) are more likely to be hungry because the body needs more energy to stay awake. And, not only do sleepy eaters tend to consume more than enough to compensate, which leads to weight gain, but a sleepy brain responds more strongly to junk food and has less ability to rein that impulse in.

The main cause behind lack of sleep and weight gain is not being sleep deprived itself, but the product of what happens to your metabolism when you are not getting enough sleep. Inadequate amounts of sleep affects the part of your brain that controls your appetite and pleasure eating. Too little sleep:

This means you will feel more of an urge to eat and less satisfied when you do. In other words, you need to control Leptin and Ghrelin to successfully lose weight, but sleep deprivation makes that nearly impossible. So, the main cause behind lack of sleep and weight gain is not being sleep derived itself, but the product of what happens to your metabolism when you are not getting enough sleep.

Just as binge-eating after too many hours of starving yourself doesn’t work, going on a sleeping binge is not going to help your body recover from pulling an all-nighter or from consistent lack of sleep. And not getting enough sleep doesn’t just make you tired . . . it also makes you fat.  Adequate sleep should be an important part of your weight loss (and maintenance) plan.

Skimping On Sleep Can Make You Sick, Fat, And Stupid – by Debbie Hampton