Too Wide to Ride? 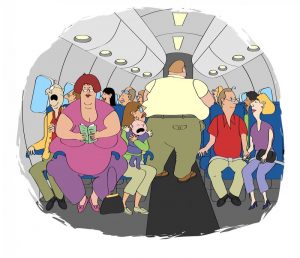 In my opinion, yes, they should.

📌 There’s weight criteria for our checked luggage. If we’re over, we are charged for it at check-in.

📌There’s also size criteria for our carry-on bags, and the airlines are very strict about that. If our carry-on is over an airline’s regulations size, it will not be allowed on the plane. We will be forced to check it, and gate-checking an over-sized bag can be subject to very unpleasant fees.

📌 If a very tall person wants more leg room, they must pay more for an economy seat that offers more leg room or pay to upgrade their class of service to another cabin.

Therefore, an obese individual who cannot fit their entire body width-wise within the two arm rests and without body parts overflowing into the seat next to them should purchase an extra seat.

Alternatively, an obese traveler can purchase a larger seat in a higher class of service or try to find flights that aren’t fully booked so as not to be crowded or to crowd another passenger. 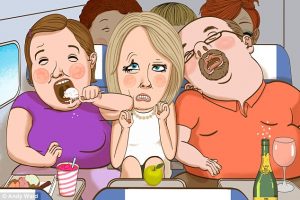 📌 Airlines should not have to eat the costs of second seats.

📌 Other passengers should not be forced to sacrifice the comfort and space they pay for, including the use of the armrests.

📌 The overall safety of the general passenger population should never be compromised.

Travelers who are excessively over-fat, who cannot fit into one seat comfortably and who will need some of the space of the passenger next to them know who they are. They can elect to take appropriate measures in advance when planning their travel and purchasing airline seats. Or, they walk into the situation eyes wide open, and an airline should have no qualms about enforcing a passenger comfort (and airline safety) policy at the airport.