Think Before You Wing It 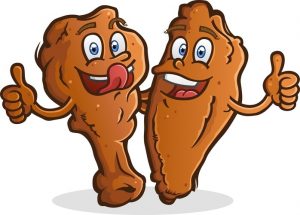 “Can I have chicken wings?”

“How do I weigh chicken wings?”

“How many chicken wings is one protein serving?”

“Are chicken wings a good option in a restaurant?”

Let me start by reminding you of the following:

1️⃣ A serving is a standard industry amount used to determine calories counts on food labels.

2️⃣ A portion is the amount of food you actually eat.

I get questions like the above often. And when it comes to weighing/measuring bone-in chicken wings, aside from de-skinning one wing at a time, then taking all the meat off the bones and putting it on a scale to weigh either 2 oz (½ protein) or 4 oz. (1 protein), here’s the skinny on wings.

Chicken wings have a higher ratio of skin to meat than any other popular cut of chicken. This is why they’re so flavorful, but they are not a healthy option.

A “standard serving” of chicken wings = 4.4 oz. or about 4 wings. That doesn’t mean, however, that that should be your portion and here’s why — using some chicken wing facts, skin eaten (because NO ONE removes the skin), and roasted, broiled or baked:

When eating out, “one order” of or “one serving” of chicken wings is usually 10-12; and a half-order (or “small order” is usually 4-6. Almost always, these wings are medium-size. So just by taking an average of the calories between a small and medium wing, that would be 92 calories per restaurant chicken wing. Therefore, you have to figure that for just a half-order (6), according to Consumer Reports, you’re gearing up to ingest around 552 calories and at least 40 grams of fat!

If deep-fried, and even without deep-fried breading, the skin on chicken makes each wing have more grams of fat than it does protein, and the calories are higher than I present above for roasted, broiled or baked. And classic Buffalo wings, in particular, are made by tossing deep-fried wings in a mixture of Frank’s RedHot Sauce and butter (and almost 50% butter at that!).

So, with what I have presented thus far, and assuming a roasted, baked or broiled wing, if you MUST do it, I would suggest the way to count 1 Protein serving would be either 3 medium wings or 2 large ones.

But let’s not stop there.

The deal with chicken wings is not so much (or at all) about the meat; it’s about the fried, about the “crisp” — which traditionally, wings are. And even if you can get them baked, ALL restaurant wings are lathered in some type of hot sauce, barbecue sauce or Asian sauce. Then, of course, there’s the “dipping” (or dunking or drenching) in blue cheese dressing. So, in the end, for just a half order in a restaurant you have to figure you’re about to eat 700 calories or more — and God know how much fat from the sauce and dressing. And just because you may eat a few of the carrot and celery sticks that usually come with wings, those vegetables do NOT make the meal healthy.

Bottom line: Chicken wings are not a healthy way to eat chicken. However, no food should be permanently banned from your life. So, if you must, do it very infrequently, do it cautiously, and always plan ahead. Don’t “wing” it.