Some Things Are Just Meant for
the “Never Ever” Category 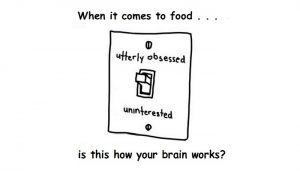 “Eat everything in moderation.”

We hear this advice a lot from diet/lifestyle gurus, fitness professionals and physicians. It’s a common expression as relates to the indulgence (or over-indulgence) of food or drink — the so-called occasional “pig-out” or “going off the wagon.”

I get asked my opinion on this quite a bit and, based on my experiences, I disagree entirely. And as Beth Skwarecki says in her article, “Everything in Moderation” is a Terrible Rule to Eat By:

The word “moderation” is vague, and its vagueness makes it a friendly, big-tent kind of concept: however much you eat, you can find a way of convincing yourself that you eat in moderation.

Few chronically-dieting, perpetually-overweight or obese people, can practice an “everything in moderation” lifestyle, at least not while doing the work – for however long it takes – to lose weight.

Eating something in smaller amounts (or less frequently) doesn’t make it OK, especially when a person knows (and their history confirms) that it will be the gateway to a full-on non-stop binge.

For this person, there is no such thing as moderation when they’re in the weight loss mode.

These are the individuals, most of whom I would analogize to someone attending the 12-step rooms of alcohol, drugs or gambling addictions. It is not OK for those in recovery (or, ever again) to moderately indulge in that which consumed them and to which they became addicted, oftentimes at the expense of great loss—of businesses, of jobs, of relationships, of family. They . . . just . . . can’t . . . do . . . it. They will no doubt every now and then get an urge to indulge “just once” in those former bad habits or addictions (heck, I still get a rare urge for a cigarette, and I stopped smoking in 1980!). However, they learn, in a structured manner and with accountability to others, how to prevent triggers whenever possible as well as how to deal with them if/when they happen . . . and dealing means abstaining, fighting through the urge — whether by calling a sponsor, reaching out to a loved one, practicing an exercise learned from a mental health professional, etc.

Similarly, for those who are chronically overweight or obese, a “moderate” indulgence is almost always a trigger. A person with a true food addiction will almost never be able to consume their drug of choice in moderation.

For some people, some things are just meant for the “never ever” category.