The Disease of Kings (and Commoners)

Charles Laughton, “In the Private Life of Henry VIII” (1933)

Once upon a time gout was associated with overindulgence in people of the upper class who had access to foods and alcohol of plenty. As a matter of fact, in 1726, British physician Richard Blackmore called gout “the grievous Calamity of the Great, the Rich and the most Easy in their Circumstances.” It became known as “the disease of kings,” because it afflicted a number of monarchs including Henry VIII, who were often awakened after a night of debauchery by a painful gout attack in the big toe.  Today, however, gout is clearly a disease of commoners as well . . . and it’s on the rise.

Gout is an extremely painful form of inflammatory arthritis caused by an accumulation of needle-like crystals of uric acid which are deposited in your joints and soft tissues—resulting in sudden, severe attacks of joint pain with redness, warmth and swelling in the joints. 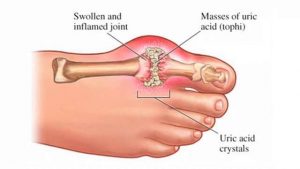 These crystals can also deposit in other tissues throughout the body, such as the kidney, which can lead to kidney stones. Family history of gout, as well as issues such as high blood pressure, diabetes or kidney disease, can increase risk for developing gout.

These days, given the epidemic of obesity in all age groups, including childhood obesity, excess fat is not only a risk factor for gout but is associated with an earlier age at gout onset.

Excess fat is risk factor for #gout and at an earlier age of onset. Click To Tweet

What are uric acid crystals?

As cells die, they release substances called purines, which are also found in some foods. Purines break down and are eliminated as uric acid. Uric acid typically dissolves in the blood and then passes through the kidneys, where it is eventually eliminated through urine. If there is more uric acid than the kidneys can get rid of, a condition called hyperuricemia – or high uric acid in the blood – develops. This can lead to the development of crystals in the joints and other tissues. When these crystals accumulate, they can cause a painful attack of gout.

What are some of the lifestyle triggers? 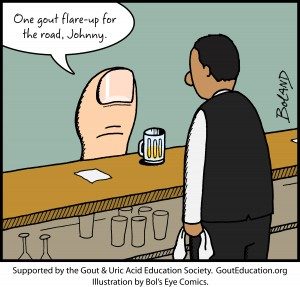 What is the weight-gout connection?

Gout is highly common in obese people. The logic is simple: Excessive weight puts extra pressure on the joints. This causes chemical changes in the body. Obese people also have higher uric acid levels in the blood. Thus, an excessively overweight or obese individual is many more times likely to get gout than a non-obese person.

Obesity is also linked to the development of insulin resistance, which is complicated by hypertension, cardiovascular disease and hyperuricemia; and insulin resistance is associated with an increased risk of gout.

Again, the logic is simple: Lose weight. Weight loss allows the uric acid in the fatty deposits inside the body to leave or excrete in a consistent manner.

On October 22, 1780 (when he was 74), and during a time when he was confined to his house for six weeks because of gout, Founding Father and First American Humorist, Benjamin Franklin, famously wrote a dialogue between himself and his gout. This is a very comical piece in which he talks to Gout about his condition, and reflects on his own weaknesses (eating too much, drinking too much, not exercising) and what he can do to overcome them.

Take a lesson from Franklin’s plea to his Gout:

“Oh! oh!—for Heaven’s sake leave me! and I promise faithfully never more
to play at chess, but to take exercise daily, and live temperately.”

So, next time you have an opportunity to partake in a “feast fit for a king” . . . pass!