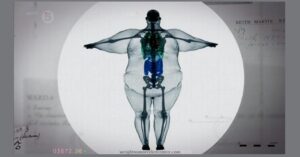 If I had a couple of bucks for every client that has said that to me over the years, I could have retired years ago!

There is such a thing as being big boned—but it’s not a medical term, and it’s never used correctly. What big boned means, and what people mean by big boned, is never the same thing.

The graphic above was created for a Channel 5 documentary (70 Stone and Almost Dead) about Keith Martin, a British man who weighed over 900 pounds. It’s a computer generated conceptual model of what Martin’s x-ray might have looked like to give viewers a better understanding of the skeletal structure of a 900-pound man.

People with larger bones are slightly larger for their heights, yes . . . but it’s the soft tissue atop and around those bones—muscle and fat—that make some people look more “big boned” than others. So, for example, an obese person can weigh more than 350 pounds and have big legs, but actually have very small bones.

The bones that make up the human skeleton comprise about 15% of the body’s weight. Thus, a non-obese 200-pound adult has a bone weight of about 30 pounds . . . and half or more of that bone weight is water!—both in the bones themselves as well as in the marrow they contain. Water weighs a lot, folks!

The dry, fat-free skeleton (such as at autopsy) comprises approximately 6-7% of an adult’s body mass.* (*See “Human Body Composition,” by Steven Heymsfield, Volume 918, Page 291, section titled “Weight of the Skeleton). Therefore, the bones of that same 200 pound adult person, at autopsy, weigh only about 12 pounds.

Here’s an excellent article written by Matt Marshall, a fitness professional, on this very subject: “Big Boned. Big Myth.” Using the results of DEXA scans (bone density scanning) for his own normal weight as well as the scans of others, he was able to clearly show how little the human skeleton weighs.

For example, he’s a 34 year old male, who at the time of his scan weighed 176 pounds, and his entire skeleton (look at the “BMC” number: the Bone Mineral Content) weighed under 8 pounds (7.92 to be exact) . . . and remember, that’s inclusive of the water in the bones. At death, his bones would weigh much less. You can also see in his article another scan result for a 40 year old man who weighed 260 pounds, carrying 101 pounds of fat on his frame (as compared to the author’s 14 pounds of fat). That fellow’s skeleton weighed only 9.27 pounds … just 1 pound heavier than the author’s.

You can do your own browser searches for DEXA scans and you will see time and again the simple facts:

So, if you’re overweight or obese and still using that “big boned theory,” DO let those facts get in your way.