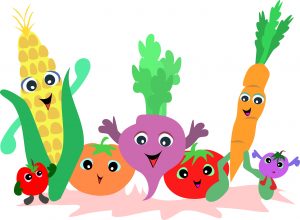 “Science Says You Should Pay Your Kids to Eat Their Veggies” is the headline of an article in the September 10, 2015, issue of the New York Post.

This so-called scholarly scientific study actually recommends that if you want your kids to eat more fruits and vegetables, you gotta show them the money! What a bunch of crap.  Nothing but junk science.

So these researchers conducted an experiment in six Utah elementary schools, offering one group of several hundred students cash prizes and another group of several hundred other students praise by teachers for eating fruits and veggies.  A third group of children got no incentives at all (the poor things [sarcasm]). So, of course, fruit and vegetable consumption was significantly higher in the group of students who got cash rewards.  (What a shock, eh?!)  They called this “cash prizes” program FOOD DUDES, which used role modeling, repeat tasting and rewards for eating fruits and veggies.

I couldn’t disagree more with this concept IN ITS ENTIRETY.  In the first place, know how I would have done this?  How ‘bout instead of calling a program Food Dudes, calling it Food: Fat or Fit, and just show kids two pictures: a slim kid and a fat kid, and the insides of both. The slim kid, instead of internal organs, can shows pictures of fruits, vegetables (lean meat, whole grains, etc.); and the fat kid’s insides can show nothing but crap.  Now THAT is a visual that kids of all ages will understand . . . and they will understand very clearly that what they put in their mouths has an affect on whether they will be fat or fit.

I especially disagreed with the point made by one of the researchers that in addition to cash prizes for eating fruits and veggies, “The children still need strategies for managing healthy eating choices outside the cafeteria and when the rewards stop.”

Wrong.  Sorry folks . . . but young children don’t know from “strategies” other than how they can get out of going to school or doing their homework, and kids don’t ‘manage’ anything: Parents do.  Barring extraordinary circumstances of course (allergies, illness, psychological issues), poor eating habits and childhood obesity are products of adult behavior.   Let me repeat that:

Parents need to create the right environment at home and in the kitchen, follow the examples they want to set for their children as relates to a healthy eating (and fitness) lifestyle, and that’s the environment in which their kids will grow.  Period.

There are thousands of different vegetables in the world.  Do any of us like all of them?  Of course not, and neither will our kids.  But, try new vegetables all the time until you identify the ones they will enjoy, or the ones they will tolerate.   You’re the parent.  You set the ground rules.

In our house, as our daughter (now 19) was growing up, and using dinner as the example, there was a nightly menu with two choices:  Column A = you eat.  Column B = you starve.  Very simple.  Was there compromise?  Yes.  But we set the ground rules.  We always had two vegetables on the table (and sometimes one of those vegetables was one that my husband and I didn’t like, but we forced ourselves to eat some at that meal and pretended we enjoyed it!).  Our daughter had to choose at least one.  As she grew, she still disliked some vegetables, but she tolerated others more and more, and now has a well-rounded array of veggies that she likes, some more than others.  We did the same thing with the various fruits we kept in the house.

I don’t need to be a psychologist to know the difference between teaching a kid right from wrong, and the importance of their being guided, with structure and discipline, towards actions and behaviors they need to take NOT because they’re getting a reward or a prize, but ONLY because those actions will result in growing into healthy and happy, physically, mentally, and socially, teens and young adults.

Giving a reward to kids for eating something is like giving a treat to a dog for bringing the ball back.  Kids aren’t pets.