Obesity is a Boobies Trap 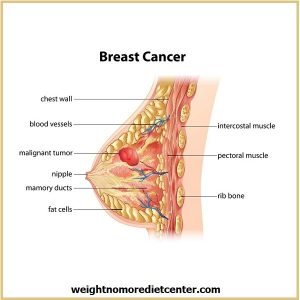 “You have breast cancer.”

Those four words can make a woman buckle at the knees. October is Breast Cancer Awareness Month, a good time to address the issue because of the relationship between obesity and breast cancer —and make no mistake: There IS a relationship. The sex hormones estrogen and progesterone are known to increase risk of breast cancer.

If you’re an overweight or obese woman, you’ve got plenty of that . . . and it produces estrogen . . . and that ain’t good.

When an overweight/obese woman is post-menopausal, although her ovaries have stopped producing estrogen, she still continues to produce it in her fat tissue—where androgens (male hormones), made primarily in the adrenal glands, are converted to estrogen. When an overweight/obese female is pre-menopausal and still in her menses years, she’s getting a double-dose of estrogen, both from her ovaries and her fat. The three estrogen factors to remember:

Another deterrent against obesity should be that the heavier the woman, the bigger and denser the breasts. This makes it much harder to detect a microscopic mammography change on obese women, which means by the time a tumor is detected it’ll be larger and more aggressive. Similarly, an obese woman who does regular self-exams won’t be able to feel a lump until it is larger.

Among many women with breast cancer, the standard of care is to use drugs that block or inhibit estrogen activity, such as tamoxifen. This is done for the obvious reason: to minimize estrogen in the woman’s body because of its relationship to cancer. However, doesn’t it make sense that the effectiveness of these drugs is compromised by higher estrogen levels in women with higher body fat? This is why obese women who have had breast cancer are at the highest risk for recurrence. Imagine a woman taking a pill with one hand to minimize the negative effects of estrogen, and then using her other hand to put shit in her body that makes her fat(ter) to produce more estrogen! It makes no sense, and it drives me crazy when I meet women who, by the grace of God were lucky enough to survive the first time around, don’t do a damn thing about their weight—which IS the one thing they can control to give them the best chance to not have a recurrence!

The analogy I make here is to obese people who are on meds for cholesterol, blood pressure, diabetes, for example, and they very often have the attitude that because they’re “taking something” it’s “under control.” No . . . it’s not. The more weight they gain, they more out-of-control the medical issue becomes, the higher dosage of meds they’ll be forced to take. Similarly, I meet too many overweight breast cancer survivors who are under a very false sense of comfort that they’re going to be just fine because they’re “taking something” (tamoxifen or other estrogen inhibitors). So, they take a pill a day and continue to be obese . . . which produces more estrogen, a direct counter to what the prescribed estrogen inhibitor is trying to do in their bodies. So basically, the doctor giveth, and the fat taketh away.  Now, isn’t that ridiculous?!  Actually, It’s more than ridiculous . . . it’s stupid.

In this day and age, women do not have to die of breast cancer. The key is prevention and early detection.  And when it comes to detection, the slimmer we are, the sooner we’ll feel a change in our breasts on our own and get to the doctor; the clearer the mammography and ultrasound results; and the sooner we can begin the process of whatever comes next.

. . . “and whatever comes next” always works out better for the woman who is slim and healthy. Why? The fatter a woman is, the more compromised her immune system, the more negative reaction she will have to the post-diagnosis protocol and recovery. A woman who is slim, fit and has a healthy diet not only has a stronger immune system with which to fight toxic chemo protocols, but also the physical agility and stamina to be up and about quickly, to do the breathing and over-the-head arm exercises . . . and to get back to her home and business life as soon as possible.

If you’re an obese woman, losing weight is crucial for the best chance at early detection, to help through the battle, to enjoy the survival, and to minimize the recurrence.

A message to all the women who are in the fight: 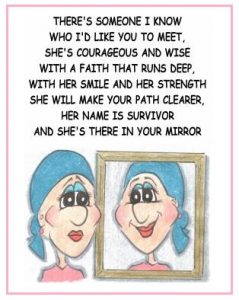