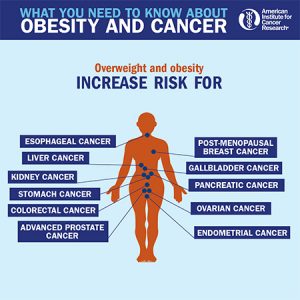 In recent years, numerous studies and reviews bear out the relationship between obesity and cancer risk, treatment outcome and recurrence.  More recently, however, two articles are worthy of special mention:

In the winter 2016 issue of Your Weight Matters (the magazine of the Obesity Action Coalition) in an article titled, The Link Between Obesity and Cancer, Taraneh Soleymani, M.D. reminds us that next to not smoking:

” . . . keeping one’s self at a healthy weight is the most important thing an individual can do to reduce their cancer risk.”

In his article for the Huffington Post on February 18, 2016, Obesity’s Link to Cancer, William Anderson, MA, LMHC, states it brilliantly:

“Being obese is like having a factory in your body polluting you with cancer-causing chemicals every day.”

Obesity affects the risk of cancer, and recurrence, in several ways.

Sex Hormones. Sex hormones, such as estrogen and progesterone, are known to increase risk of breast cancer. Premenopausal women produce most of their estrogen through their ovaries. When they become postmenopausal, they stop producing estrogen via their ovaries, but continue to produce it in their fat tissue — where androgens (male hormones), made primarily in the adrenal glands, are converted to estrogen.  As a result, the more body fat a woman has, the higher her estrogen level.  Estrogen fuels tumor growth.  More specifically, as relates to breast cancer, high levels of post-menopausal estrogen can stimulate abnormal breast cell growth, which leads to more rapid development of estrogen-positive breast cancers.

Among many women with breast cancer, the standard of care is to use drugs that block or inhibit estrogen activity, such as tamoxifen or aromatase inhibitors. However, the effectiveness of these drugs may be compromised by the higher estrogen levels in women with higher body fat.  (This is a major factor as to why obese women who have had breast cancer are at the highest risk for recurrence.)

Obese women who have had breast cancer are at the highest risk for recurrence. Click To Tweet

As relates to women and ovarian cancer, although the exact cause of ovarian cancer is not known, one of the risk factors may be obesity. The link?  Estrogen, which is, as I stated earlier, made in body fat . . . and the more fat cells a woman has, the more estrogen she produces. In premenopausal women, each month progesterone is also produced to enable the lining of the womb to be shed during the menstrual cycle. However, after menopause, when estrogen production by the ovaries drops dramatically, it continues to be produced in fat tissue. Therefore, women in menopause and who have excess body fat continue to produce high levels of estrogen, and these act on the womb lining—but without the regulating effects of progesterone.  It’s this that’s the link to ovarian cancer.

Men aren’t of the hook.  Men also have to concern themselves with estrogen because visceral fat produces a form of estrogen.  Obesity increases a man’s risk of developing prostate (and colon) cancer, and the fatter the man, the more aggressive the cancer.

Insulin. Insulin and insulin-like growth factors, can stimulate cancer growth. Insulin sends signals to cells to grow, and can stimulate insulin-like growth factors to help in proliferation. Abnormally high cell growth rate can increase the likelihood of mutation, which could lead to cancer. The number one cause of insulin related issues is diabetes, and obesity is a known risk factor for diabetes.

Do slim people get cancer? Of course.  But, the better our overall health, the less visceral fat we have, the less compromised our immune system, the better able our bodies are to withstand a treatment protocol, the more successful we’ll be in the long run — not only in terms of recovery, but in preventing recurrence as well.

Over a decade ago, an international team of researchers reported that excess weight was linked to higher risks of 5 cancers: colon, esophagus, kidney, breast and uterus. Recently (August 25) that same group of researchers, in the New England Journal of Medicine, expanded that list significantly by identifying 8 additional cancers linked to excess weight and obesity: stomach, liver, gall bladder, pancreas, ovary, thyroid, meningioma (a type of brain tumor) and multiple myeloma (a type of blood cancer).

As I tell clients, and as I wrote above a year ago, excess fat causes an overproduction of various hormones, such as estrogen, testosterone and insulin, as well as with chronic inflammation — and these factors, confirmed by these researchers, helps explain its link to cancer.

This is certainly a wake-up call for everyone, but especially those who’ve been lucky enough to survive one bout of cancer. Obesity gives them the greatest risk for recurrence.