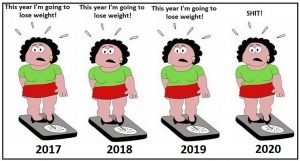 For instance, one client with a history of “being really good during the week” and binge eating all weekend, literally woke up one morning after a weekend binge, feeling so awful physically and mentally and so completely disgusted with herself, that when her feet hit the floor she said out loud to herself, “That’s it. I’m done.” Upon reflection, she admitted that many aspects of her life had changed for the better over the last year or two so that she was finally ready to give up her compulsive dieting.

✔️ She began seeing a therapist.

✔️ She was confident enough to get over a fear of leaving a job she hated.  She changed careers and became much happier in her work.

Also, those who were successful at keeping their weight off also made some very important changes to help them live slim.

📌 They may have learned how to solve their problems more effectively, rather than eat emotionally.

📌 If they previously used a hectic work schedule as an excuse for not exercising, they found a way to do it—either by coming in earlier and taking a longer lunch to work out; using office building stairs instead of the elevator; or parking their car further away from their building’s entrance or from a store or mall entrance to have more steps to walk.

📌 As they did in weight loss mode, they continued to bring their lunch and snacks from home rather than eat out or order in with co-workers or eating in the company cafeteria.

Last year at this time, were you overweight or obese?  Did a healthy goal weight seem so unattainable, and did a year from then seem so far away?  Well, here we are . . . and another year has come and gone. Look how quickly it passed. If you want to be a successful “loser” in 2020, you first must accept some things about yourself.

You just have to get stubborn.  You have to develop a kind of selfishness about yourself and your weight. Just figure out what it takes to take care of yourself (and you know what that is) and do that. If you have to carry around 5-lb. sacks of apples in your car so you always have something healthy handy, then do that.  Stop being concerned about what it looks like to others.

2.    You have to get in touch with what your weight is doing for you.

Ask yourself what you’re getting out of being fat. Many people hide behind their weight; it helps them avoid challenges or escape intimacy. I recall another client telling me her weight had something to do with her family’s pressure to achieve, as her parents did exactly that with an older, very smart sibling. She thought that if she were heavy, people (her parents, in particular) would expect less of her and be happy to “settle” for her the way she was.

3.    You have to prepare for the hardship of being slim.

You might ask yourself, “What in the world could possibly be hard about being slim?!” Believe it: The world treats you very differently at 210, at 185, at 160 and 135. Most of the changes will be positive, others not so much—at least initially. People may have different expectations of you. You’ll have to deal with buying new kinds and sizes of clothing, and people of both sexes may treat you very differently.  After a while, you may even start to get irritated when people compliment you. Heavy friends and relatives may (dare I say, will) resent your success and try to sabotage your efforts. It’s also important to realize that losing weight doesn’t wash away all other problems: You’ll no doubt still have an argumentative teenager to deal with, and you and your husband may still have financial issues to worry about. In fact, for some people, certain problems become even more acute, particularly if they were hiding behind their weight. You may have trouble accepting yourself as slim. Being aware may help you better handle what’s ahead.

Every single successful weight-loser sees more positive changes in their lives than negative ones: Shopping for clothes they want to wear instead of trying to find clothes that look good on them; enjoying compliments regarding their weight loss and improved appearance; increased energy level and stamina; being more active, outgoing and self-assured; more restful sleep. Even though losing weight will not make your other problems go away, you may feel much more confident about solving them.

Losing weight and keeping it off may be one of the hardest things you ever do. But like all difficult challenges and bad habits we try to break, or addictions we try to conquer, it does get easier with time. Accept the fact that it’s just something you must do. It’s OK to feel that it is unfair to have a weight problem, but get tired of it, get over it and get rid of it!

6.    You have to know that your motivation for weight control will go up and down.

Whether in losing-weight mode or slim-maintenance, sometimes it’s just plain harder than at other times to keep focused on the prize. It’s especially difficult when people stop noticing the new you. When you’re in losing weight mode, it’s exciting: Your waist gets smaller, you start dressing differently, you might change your hairstyle, and everyone notices. But, for some people, the maintenance mode is tough because there’s no change, and no change is about as exciting as watching paint dry! Successful weight-losers and weight-maintainers develop their own internal incentives. One particular client comes to mind who is currently maintaining a 40-pound loss. She told me she always tries to think slim. Sometimes, she’ll close her eyes and see herself in a gorgeous dress in the not too distant future, walking her daughter down the aisle. She imagines people noticing her and she feels good about their reactions. She says this keeps her from binge eating and helps her to stay focused on her weight goals.

7.    You have to give yourself permission to screw up.

Despite all the best laid plans and preparation, you will definitely make mistakes from time to time. Successful weight-losers do not let a lapse become a relapse. They learn how to pick themselves up after a spill, dust themselves off and start again. So, you have to learn to forgive yourself. If you mess up, it’s not the end of the world. The sun will rise in the morning; it always does. Start again tomorrow. You’re not going to change overnight.

8.    You have to accept that you won’t lose weight overnight.

You’ve probably heard the saying, “It took more than a day to put it on. It’ll take more than a day to take it off.” Well, folks, that’s definitely true. Unfortunately, too many people who finally decide “today is the day” are suddenly in a big rush. Forget it. It’s not happening. If you’re truly serious about dieting for one last time, then you must accept that you are on your way to becoming slim for life. The habits that lead to your being overweight or obese can be changed permanently . . . but over a period of time. That’s the weight you can keep off. Weight gain doesn’t happen overnight. Weight loss doesn’t either.

Nothing good EVER comes from being overweight.
No one EVER becomes slim and healthy without working for it.
It NEVER gets easier if you keep putting it off.

How you begin the New Year is the key to everything else that follows.  Resolve, this year, to get your New Year off to a good start.