“My Eating is Out of Control” 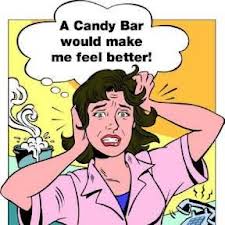 Boy, how many times have I heard that from a client?!

The typical emotional over-eater feels helpless and frustrated because of his/her history of failure at weight management. They feel as if they can’t stop themselves from over-eating, despite knowing it’s self-destructive. They often feel like their right hand is stuffing food into their mouth while the left hand tries to slap it back onto the table.

How to explain, then, the feeling of being out of control?

First we have to recognize that our decisions are influenced by both conscious and unconscious thoughts and feelings. We humans are complex beings. We can think one way and feel quite another. Our minds are driven by forces from the present and the past. So it’s entirely possible for a person to be consciously pursuing the goal of healthy eating to lose or maintain a healthy weight while, at the same time, an unresolved, hidden issue influences behavior down the opposite path.

Another reason people feel their eating is out of control has to do with the psychological power of food. Food and eating become so closely associated with emotional things that they often substitute for experiences we can’t get any other way. I’ve heard clients say more than once “Food never lets me down.” Food is reliable. It’s dependable. If a chocolate bar is what you want, you know where to get one. You know what it tastes like. You know what it’ll do for you in that moment, how it will make you feel. Food is so powerful that often someone will feel hopeless to find anything that equals its emotional potency, and that leads them to feel out of control.

It’s quite common that emotional eaters have had a number of life experiences in which they’ve felt out of control of things crucial to their safety, well-being and self-image. Many of those I’ve spoken to had a history of physical or verbal abuse, came from alcoholic homes, or suffered traumatic loss. For them, food was a primary source of comfort, mainly because it is such a controllable substance. They never learned basic emotional coping strategies, and, as many have told me, food was more dependable than the people who were supposed to love and protect them.

The connection between eating and control is complicated (to say the least). If you are an over-eater, and if you let yourself fall prey to the conclusion that you are out of control, you’ll miss the important point that complex and hidden feelings are acting upon your decisions. Your emotional life is the real source of your problems with food.