Ladies, Did “I Do” Morph Into “I’m Done” Caring About How You Look? 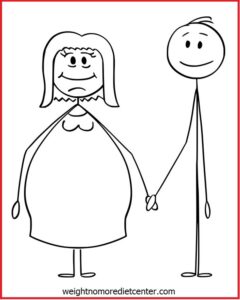 My husband is as slim as the day I married him. He bothers me about my weight.

I avoid intimacy with my husband because I know how he feels about my gaining so much weight during our marriage.

I don’t sleep well through the night; I’ve started to snore. It gets so bad sometimes that my husband sleeps in another room.

We’ve been trying to become pregnant without success. The doctor said my weight is a factor in irregular ovulation.

These are just some of the real statements I hear a lot from real people. When I do, I ask the woman to turn the tables for a minute.

If she was as slim (or pretty close to it!) as she was on her wedding day, it wouldn’t be by accident. It would be because she took pride in the way she looked and practiced a lifestyle that kept her in good shape. It would, no doubt, also be because she wanted to maintain being attractive to her spouse. So, if her husband was no longer the same slim and physically attractive man that she married, if his weight prevented him from as nicely as he used to and that attracted her to him initially, and if he couldn’t be as physically active as he was, and didn’t have the same passion or stamina in intimacy as he used to because his excessive weight inhibited him, or even prevented him from being intimate, would she like it?

If you are an overweight or obese woman, ask yourself these same questions.

If you’re married to a slim man who has voiced his displeasure and/or concern for your weight gain and health, this doesn’t mean that he doesn’t love you. It just means he wishes you would take better care of yourself so you can be around longer, and so the two of you can grow old together.

Of course it’s not only for the physical attraction we want to maintain for the duration of our marriages, but we should want to take care of ourselves so we can maintain good health for the duration of our marriages. With obesity, comes medical issues. With medical issues, comes limitations. Do you want to spend time with your husband doing things … like traveling, dancing, going to concerts, walking in museums?

Or, do you want him to bear the burden of spending time taking care of you, reminding you which medications to take, and transporting you to and from doctors’ appointments? Is that what you think he envisioned on his wedding day? Did you?

Never take your husband or partner for granted. Never assume your severe weight gain doesn’t bother him, even if he says it doesn’t. Maybe, just maybe . . . the reason he says it doesn’t is because he no longer cares and is finding companionship and passion elsewhere.