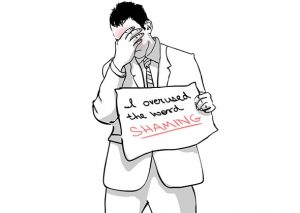 In his article, There’s No Such Thing as “Fat Shaming” — It’s Just Advertising,” Elliott Haworth writes:

“I take issue with the Vicariously Offended; the virtuous who take up the mantle of oppression, regardless of whether they are personally affected, at every given opportunity.”

These days the “shaming” label is slapped on every single thing that makes us feel bad — but NOT everything we don’t want to hear is shaming. Frankly, “fat shaming” too often isn’t.

The word “fat” is not a bad word. It is not synonymous with ugly, lazy, stupid or unattractive. It is just an adjective to describe how a body looks.

If an over-fat person is ashamed to have that fact brought up in a conversation by a health professional, that’s not fat shaming. It’s truth telling.

If they become defensive about an honest and sincere attempt by a loved one to talk to them about the physical and emotional repercussions of their weight, that’s not fat shaming. It’s truth telling.

Calling someone a fat pig, or making fun of them because of their size isn’t fat shaming. THAT is bullying!

Before playing the fat shaming card, stop and think: Are you the victim of real bullying or of your knife and fork?

Bullies never change. But you CAN change how your body looks.

Society tends to tell everyone that they are perfect the way they are and should not change a thing, but when it comes to be a health concern, something does need to change.

If you are overweight, then you should try working towards a healthier lifestyle. You should not listen to society and maintain a ton of weight and settle for calling yourself “curvy” and “thick” and “plus sized.” You should not keep telling yourself you’re comfortable as you are, eating however you wish and act like you want to be obese just because that is what you are. If you were slim, would you wake up one morning and purposely work to gain a lot of weight so you could grow into “curvy” and “thick” and “plus sized?”

Telling over-fat people to accept their bodies as they are, to be happy with how they look even if they are extremely unhealthy is the same as telling people with anorexia that they should continue starving themselves if that makes them happy.

Every single day, as I’m sure you do as well, I see heavier girls and women posting on Instagram and elsewhere saying “This is what a real body looks like. No man wants skin and bones.” Hmm . . . is that skinny shaming, I wonder? These kinds of messages, in my opinion, conveys a message to overweight young girls that being fat isn’t all that bad. It is — for their mental and physical health and longevity . . . and that’s not me doing a bit of fat-shaming. That’s me stating the truth.