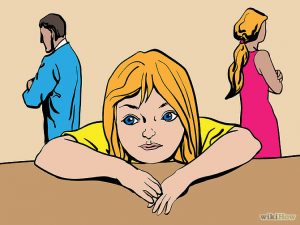 An article by psychotherapist and marriage counselor, Mel Schwartz, For the Sake of the Children, really struck a nerve with me.  Of course, it speaks about “working” at a marriage; that’s what we commit to on our wedding day. When all working fails, however, the whole notion of “staying together for the sake of the kids” is just plain bullshit (my word, not his).  It’s always for the sake of the adults — their own fears, dependencies, insecurities, inadequacies, and concern for the public persona and what the neighbors will say. It’s never for the sake of the kids.

In my line of work, I see way too many overweight and obese kids.  I don’t have to list for you all the physical, emotional, psychological and social issues they face because of their weight.  And let me be very clear: Obesity in a child is a product of adult behavior — more specifically, the parents . . . even parents in a good marriage.  However, in a divorce, it angers (and saddens) me how adults, who at one time in their lives loved each other enough to marry and make a lifelong commitment to each other, use their kids as sharp knives with which to “stick it” to each other.

Let me tell you about three young clients, among the many, who immediately come to mind.

Little boy, 10, lives with his mom.  His parents were separated, on the road to divorce.  The boy was very overweight, had elevated cholesterol levels, and his pediatrician FINALLY (don’t get me started on how long pediatricians wait to do this; that’s a whole ‘nother blog) told his mother she must do something about his weight.  So the mother brought him in, and he began the program.  We worked with his mom to plan his meals and snacks, she did the right shopping, and she used portion-control with his food.  His school was also very cooperative, allowing his mom to keep a few small water bottles in the Nurse’s office and he would stop by a few times a day to drink them.  He lost a couple of pounds the first week and was very happy.  She brought him in after he spent a weekend with his father, and he showed a weight gain.  He lost a few more pounds over the next two weeks, then came in with another weight gain after another weekend with his dad.

Know why this happened?  The father thought his son was fine the way he is.  He didn’t agree with the pediatrician that his son needed to lose weight; and of course the more upset the boy’s mother became, the more the father enjoyed sabotaging his son’s health.  It was almost like some kind of perverse enjoyment he got knowing how he upset the boy’s mother.  The mom was running ragged, working, taking her son to and from school and other events, food shopping, preparing his meals and snacks . . . everything right.  The father, well . . . he had absolutely no interest in supporting his ex-wife’s efforts when he had his son alternate weekends.  He would have no part in helping his son lose weight.

I called the boy’s pediatrician to get some assistance; he tried, but to no good outcome.

A boy, 11, extremely overweight. His father is a very successful surgeon with multiple practices, and lives the life he preaches as relates to the importance of good health.  He takes care of himself, is in great shape, eats right and exercises regularly.  His ex is a very pretty woman but obese.  She gained all of her weight after their marriage.  Her obesity was, in large measure, the reason for their separation and eventual divorce.

The father reached out to me about his son and said he would not only bear the cost for his son to do the program but that he would pay for his ex as well, who said she’d use the opportunity to lose weight to support and encourage her son.  The father committed to bring his son to see me once a week.  The mother committed to do the same. That didn’t happen.

The dad did a lot of healthy cooking at home, and always had good snacks when they were spending the day out together. He would bring his son in once a week, and the boy would lose weight and be very proud of himself: He understood the results he got was from the actions he and his dad were taking.  As a matter of fact, when his dad brought him, he couldn’t wait to get on the scale.  The mother, on the other hand, when she did keep appointments, oftentimes instead of coming into the office with her son, would drop him off outside and then go on an errand.  The boy would come in without a diary at every visit.  The mother wasn’t doing any planning or preparation; I had no way to know what he had been eating except to have him try to remember, which was impossible.  Despite her denials, the mother never did a damn thing asked of her—not for herself or for her son.  As a matter of fact, the boy had a regular therapy appointment in a town where his mother had a favorite ice cream store.  He would tell me privately that every time she took him to that appointment, they would stop in afterwards for ice cream.  Other times, there were trips to fast food places.  I never broke this boy’s confidence by telling his mom what he told me in private; I just let her repeat the weekly mantra of her telling me she didn’t understand why he wasn’t losing weight.

The only reason this woman joined the program was to take more money out of her ex’s pocket.  The reasons she didn’t do a damn thing required to help her son was because (a) she is obese and didn’t want to help herself or to help her son; (b) she knew how much it upset her ex to see their son in that condition; and (c) misery loves company: Her son is her fat friend at home.

I finally called the mother and let it rip over the phone and told her that unless and until she starts caring about her son’s health and weight as much as I do, I can’t service him.  I called the dad, and we put things on hold.

Oh, I almost forgot:  Want to know what this mother does for a living? Are you ready?

SHE’S A PEDIATRIC PSYCHIATRIST! . . . an obese, miserably unhappy pediatric psychiatrist who needs to get her own head examined.

A teenage client who recently returned to the program.  I met her for the first time 8 years ago when she was 10 and weighed 111 pounds.  Her mother also had a few pounds to lose at that time so she also joined the program to set an example and to encourage her daughter.  Mother told me the father was obese, that he had a very obese other daughter from an earlier marriage.  As expected, he sabotaged my client at every turn.  He brought all kinds of crap into the house, and as hard as the mom tried to do her part to help her daughter, she never got the support from her husband when she was absent from the home.   The girl’s weight loss attempts were an effort in futility.  She became frustrated, and she stopped coming.  The mother continued, and lost all her weight.

The girl returned to the program at 14, then weighing 174 lbs (a 63 lb. gain!).  The mom, who lost her weight four years prior and who changed her lifestyle, looked great and was maintaining her slim physique.  Again, the father just refused to do the work necessary while his wife was out of the house or away from home for a few days at a time while traveling.  The daughter became frustrated again and gave up.

The teenager returned to my office the first week of this month, now 18 years old, weighing 202 lbs (a 23 lb. gain!). Her mom told me the father is now well over 300 pounds and is suffering with back and feet issues and in overall poor health.  She told me privately that she hasn’t been happy in their marriage for quite some time, and there is no intimacy in their marriage any longer.  She stays with him “for the sake” of the daughter (yeah, like that’s helped thus far, eh?) and for the financial security.  The daughter is very unhappy being almost 80 lbs. overweight, especially at a time when her applications are in and she’ll be heading to a college or university next year.  However, now that she has a driver’s license and can be more independent, she wants to be involved in her own well-being, including food shopping, and has made a commitment not to indulge her father if/when he asks her to bring ice cream and cake or any other crap into the house.

Oh, I almost forgot:  Want to know what the father does for a living? Are you ready?

HE’S A CARDIOLOGIST! . . . a morbidly obese practicing cardiologist who can’t take care of himself, who enabled and food-pushed his daughter to (a) piss off his wife, and (b) so he can have a fat friend at home, someone to be miserable with.  As far as I’m concerned, this man has no business seeing patients.

I could go on and on and on and list one client case after another of overweight and obese kids who were caught in the middle of parents slinging arrows at each other but which always landed on their kids instead.

Look, I get it . . . I really do . . . divorce is a very hard situation for all, especially for the kids involved, and there are many possible reasons why kids in divorced families gain weight.

If you are a divorced parent and have an overweight or obese kid, I don’t give a shit how much visceral hate you have for your ex, even if it’s rightfully deserved. You had that kid together, and he or she is BOTH your responsibilities.  You owe it to your child to do everything within your power to make sure he or she is physically healthy, because overweight and obesity in children — aside from the long, long list of medical issues — leads to emotional distress, psychological issues, depression, poor self-esteem, lack of confidence, poor social and scholastic skills.

If you’re a divorced parent who is doing your part to help your overweight or obese child but your efforts are constantly being thwarted and sabotaged by your ex, I would encourage you to seek the assistance of a therapist who specializes in family issues. Get guidance from that professional on how to approach your ex in a civil manner on the necessity of putting your child’s health and well-being above all else that might be between you. If that doesn’t work, speak to your family law attorney to see what remedies there might be.

If you’re divorced, you didn’t stay together for the sake of your children.  So, you got that one right.

However, if your kids are overweight or obese, you now have to WORK together for the sake of your children.  If one or both of you don’t, not only are you selfish and self-centered . . . but you should be ashamed of yourself as well.