Here’s How Sushi Makes You Fat 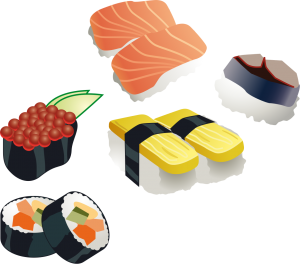 Almost everyone loves sushi. After all, what’s not to love? It comes in all varieties and all colors, and those bite-size pieces are so cute, right? And who doesn’t think a sushi hand roll in the shape of a cone isn’t healthier than an ice-cream cone, right?  Well . . . uh . . . not exactly.

Sushi has a reputation as a healthy low-fat meal option, but if you’re not eating it the right way, there ain’t nothin’ low-fat or low-calorie about it! Depending on what you order, your sushi meal can be an absolute disaster. Certain rolls can have upwards of 500 to 1,000 calories.  So, let me give you some facts and figures.

These calories are a conservative (emphasis on the word “conservative”) average.  As with any hand-crafted food, calories in sushi, sashimi and rolls will vary in their sizes/weights and the content amount of condiments (i.e., rice  vinegar, sugar, sesame seeds, tempura flakes, mayo, sweet sauce, chili sauce), fish and rice.

I would add to the above that while the nutrition information for sushi differs from roll to roll, and from restaurant to restaurant, most sushi rolls have a significant amount of sodium.

When it comes right down to it, when you remove all the Americanized/westernized bells and whistles—the sauces, the cream cheese, the crunchy flakes — let’s remember that sushi is a Japanese-style FISH-FOCUSED meal. So, FOCUS ON THE FISH . . . and not on all the stuff that makes you fat.

Another good read in Reader’s Digest: 7 Sushi-Eating Mistakes That Ruin Your Healthy Diet