Have a Healthy Chanukah 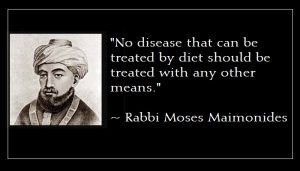 The festival of Chanukah is one of the best loved holidays in the Jewish calendar. The powerful images of the miracles of the Jewish victory over the Selucid Greeks in the 2nd Century BCE and the miracle of the one-day supply of oil burning eight days in the re-dedication of the Temple are an annual inspiration to Jews everywhere. The Hebrew word Chanukah means “dedication.” Why not then, this Chanukah, dedicate yourself to your health, to your well being, and to a healthy lifestyle? If you’re parents, why not dedicate yourselves to setting a good example for your children?

When children have poor table manners—using their hands instead of utensils or chewing with their mouths open, for examples—parents will likely reprimand them and say, “You’re eating like an animal.” Yet, while animals lack the etiquette of proper table manners, we can say this much for them: They eat only for their bodily needs.  Animals do not overeat, nor do they indulge in the pleasures of eating the way humans do. Relishing the taste of something for taste sake or to satisfy an emotional need is uniquely human.

It is said that people who sincerely believe they were put on Earth in order to serve God will eat in order to sustain life and to have the energy to carry out their assignment on Earth. While they may enjoy eating, they neither overindulge themselves nor constantly seek ways to enhance their food. These people are unlikely to develop obesity because they would not consume more food than is necessary to maintain optimum bodily function.

Each year at this time I remind my observant, orthodox Jewish clients of this. I don’t do it to engage in dialogue on the issue, or for an explanation as to how they rationalize their belief they exist to serve God when their obesity zaps their energy to carry out His word. I do it because I want them to reflect upon it.

In the thirteenth century, Rabbi Moses Maimonides stated that the majority of human ills come from unhealthy eating practices. He also said:

“Since maintaining a healthy and sound body is among the ways of God — for one cannot understand or have any knowledge of the Creator, if he is ill — one must avoid that which harms the body and accustom himself to that which is healthful and helps the body become stronger.”

Still, so many people, instead of developing more body-conscious eating habits, apply their genius to seeking ways to stuff themselves without becoming overweight.  It is a humbling thought that if humans did eat like animals, they would live longer and be healthier.

It is fitting that Chanukah begins during the month of Kislev (on the Judaic calendar), the month of dreams and sleep. Many of the Torah portions of this month speak of sleep and dreams—Jacob has his dream of a ladder and God speaking to him; Pharaoh has dreams that need to be interpreted.  In sleep we have access to a world where both what is impossible and what may seem impossible during the day becomes possible; we only have to picture it.

If you’re overweight or obese, move beyond the dream of being slim and healthy. Make it happen.