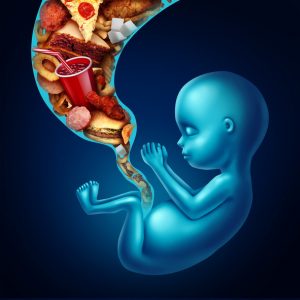 I see a lot of very overweight and obese young women and for me, since childhood obesity is such a passion of mine, I talk to these women about all the pitfalls of being obese and how it will not only affect their fertility but also how their weight will affect their children starting right in the womb and then all the years thereafter.

Now, I know you all understand how, after a child is born, the mother’s eating habits and lifestyle is what sets the stage for her children’s habits and lifestyle as well. But, she does the same for her kid in utero. A pregnant woman really is eating for two . . . and that matters. If an obese woman doesn’t care about herself, her health and wants to eat as she wishes, that’s fine; but she is selfish in not caring about the fetus she is also feeding. The first opportunity we have as mothers to put our children’s needs before our own is . . . in the womb! 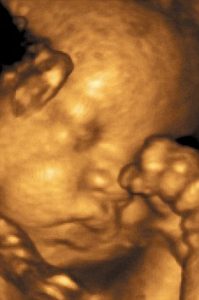 Fat children tend to be born of fat mothers because of how our genes control our insulin production, and how and when we become insulin resistant. Not only are more children obese now than ever, they’re also fatter at 6 months, which can be linked to the fact that women who are obese have a very high probability of developing gestational diabetes.

As a matter of fact, University of Cambridge researchers, studied gestational diabetes among more than 4,000 first-time mothers, and found that women diagnosed with diabetes were twice as likely to have excessively large fetuses by 28 weeks compared to women without diabetes. Fetuses were five times more likely to be excessively large by 28 weeks if women had both obesity and diabetes, compared to babies born to moms without either condition.

Why does this happen?

Children in the womb are supplied with nutrients from the mother in proportion to the level of nutrients in her blood. The higher the mother’s blood sugar, the more glucose to the womb.  As the pancreas in the child develops, it responds to this higher dose of glucose by developing more insulin-producing cells.  So, the higher the blood sugar in the mother, the more insulin the child will produce as it gets close to birth.  The baby will be born with more fat, with a tendency to over-produce insulin and become insulin-resistant as it gets older.

There are so many potentially harmful changes to a fetus of an overweight or obese mother as well as, of course, potential serious medical issues for the mother (including including preeclampsia and gestational diabetes, can increase the risk of having a cesarean delivery). Women who are contemplating pregnancy should plan ahead for that event and lose weight.  This will give them the best chance to create the optimal environment in which to conceive and carry to term a healthy baby.

Fetuses Grow Bigger, Faster if Moms Have Diabetes or Obesity
Why you REALLY shouldn’t be eating for two: Fat mothers DO have bigger babies.