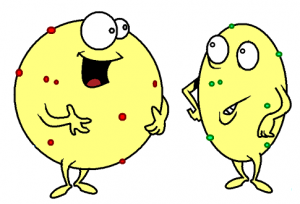 It would be tempting to believe that an obese person has more fat cells, but the quantity of fat cells does not change. What is different in the obese vs. leaner person’s fat cells is just the size.

Scientists have known since the 1970’s that the amount of fat cells in both thin and obese people is set during childhood and adolescence (our first set of fat cells start developing in utero in the last trimester of pregnancy), but a research study by Kirsty Spalding, Professor at Sweden’s Karolinksa Institut, Department of Cell and Molecular Biology, used several different experiments to elaborate that point.

Spalding’s studies included counting cells, examining the effects of bariatric surgery, and using Cold War radioactive victims to figure out to what degree cells are replaced. From counting cells Spalding was able to confirm that in both heavy and lighter people the number of fat cells remains constant after time. The number of fat cells only changes during childhood.

The researchers counted the fat cells of 20 people who were obese and had stomach stapling surgery to reduce food intake. When Spalding and her team measured these folks again two years after the procedure, they found no reduction in fat-cell number: they still had over 80 billion individual fat cells in their bodies despite losing an average of 18% of their body weight. (Results were the same for people who had lost massive amounts of weight without surgery: the number of fat cells remained the same.)

Spalding’s team studied fat extracted during liposuction procedures from several dozen people who had lived through the period of Cold War atomic bomb testing, from 1955–63, when the atmosphere was briefly more radioactive than normal. Food grown and eaten during that period had elevated levels of an isotope called carbon-14. They found that fewer fat cells showed a heavy dose of carbon-14 than might be expected if these cells were never replenished. This showed that the cells had been subject to turnover in the intervening decades.

During adulthood, about 8% of fat cells die every year only to be replaced by new ones. As a result, adults, even those who have lost a massive amount of weight, have a constant number of fat cells. It’s changes in the volume of fat cells that causes body weight to rise and fall (as fat cells expand or shrink).

Fat cells can proliferate in childhood, although not in adulthood. This proves how important it is to keep children at a healthy weight while they are setting their number of fat cells. So although obesity tends to run in families, avoiding getting fat at a young age will help to establish a healthy number of fat cells for life. People with kids should ensure they have a healthy lifestyle.