Falling Off the Weight Loss Wagon 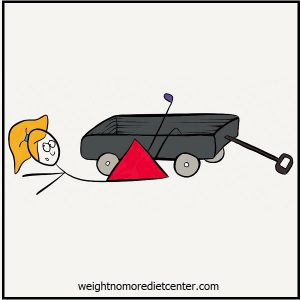 One of the most discouraging aspects of weight loss is the inevitable slips . . . and  everyone has them. For some people, the occasional slip brings about an all-out binge  . . .  followed by regret, remorse, guilt, disgust, self-loathing, a sense of powerlessness and a feeling of “what’s the use?”

Sound familiar?  This is what is meant by “falling off the weight loss wagon,” and if you can change how you think about it, you don’t need to be victimized by it anymore.

Let’s start by looking at a simple kid’s board game called “Chutes and Ladders.” 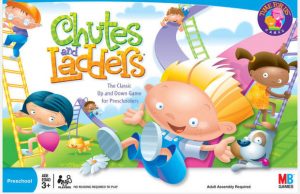 In case you forgot how to play (or, if you’re too young to ever have even heard of the game!), here’s how it works:  You use a spinner to advance from space to space toward the winner’s spot. Along the way there are ladders—which has you climb up and over a lot of spaces—as well as chutes, which send you sliding back in the opposite direction.

Some kids are pretty mellow and play this game with a laissez faire “whatever” attitude, taking life as it comes with all its ups and downs, pitfalls and triumphs. They learn the wonderful moral of Chutes and Ladders: Half of the secret to life is just showing up.  Keep playing the game, and eventually you’ll get where you’re going.

Some kids, however, get really upset when they land on a chute. They’re ready to quit the game, pick up their marbles, so to speak, and go home.  For some reason, they believe that life isn’t supposed to have any chutes. When they land on them, they are very disappointed and feel like giving up.

Well, weight loss is like a huge game of chutes and ladders!

In dealing with hundreds of clients over the years, we’ve discovered that the biggest difference between the winners and the losers in the weight loss and maintenance wars isn’t whether or not people have slips and go off their program. It’s not really a question of if they have them; it’s a question of when. What really makes the difference is how you deal with the slips when they happen. Here’s an example. You’ve been absolutely wonderful on your eating plan for three weeks. You’ve been sticking to your program and feeling pretty terrific. You go to a wedding and have a glass of wine. Before you know it, someone is insisting you try those delicious little canapés, and before the wedding singer can say, “ . . . and the bride cuts the cake” you’ve managed to down about 4,000 unwanted calories from stuff you wouldn’t have been caught dead looking at during the past couple of weeks or months—desserts, breads, alcohol, you name it. Most people think that’s where the action stops. Actually, it’s where the real action begins.

First, a reality check. Have you done a whole lot of damage? Not really. Maybe you put on a pound or two. So what? You can knock it off in no time, and go right back to “work” on yourself. So what’s the problem?

The problem isn’t what you did, but what you make it mean. You tell yourself that your “going off” means that you have no will power, that you will never EVER succeed, that you don’t deserve to succeed and that your efforts are in vain. In other words, you hit a chute and now you want to pick up your marbles and go home, stop the game.

Let me suggest something more empowering.

Suppose, instead, you learn to see life’s occasional chutes as just that—stumbling blocks that everyone hits on their personal path to achieving their goals (weight loss goals or otherwise), nothing to be afraid of and certainly nothing to which you should give a lot of meaning. So you hit a chute.  So what?  On your next spin, you might hit a ladder.

Most important of all to remember:  You can’t win the game unless you keep on playing. And every minute gives you a new chance for another spin.  Take it.  And don’t look back.