Do You Take Health Advice From an Unhealthy Doctor? 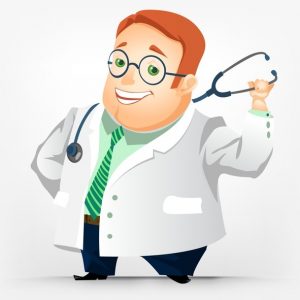 I don’t believe I’m going out on a limb when I say that we expect people in their fields of service to match what they’re selling. Speaking for myself, I do.

We expect dentists to have good teeth.

We expect dermatologists to have nice skin.

We expect personal shoppers to have an immaculate sense of style.

We expect equestrian coaches to know how to ride.

We expect interior designers to have nicely designed homes and offices.

We expect personal trainers to be fit.

We expect professional make-up artists to apply their own nicely.

We expect professional organizers to be well organized.

With that reasoning, shouldn’t doctors be a picture of health (and especially in the areas of medicine they practice)?

Would you really listen to a doctor who smokes tell you that for health reasons you should stop smoking?

Would you really listen to a doctor tell you that for health reasons its important for you to lose weight when clearly that doctor cannot follow their own advice and get control of their own size?

In a 2012 study of 500 primary care physicians around the country, researchers at the Johns Hopkins Bloomberg School of Public Health and the Johns Hopkins University School of Medicine found that a doctor’s own size influenced how he or she cared for patients with weight problems. Obese physicians were less likely to discuss weight loss with heavy patients: only 18% of these doctors discussed losing weight with their patients while 32% of normal weight physicians did. What’s more, the researchers found that:

Can’t we infer from this, then, that doctors’ weight plays an indirect role in perpetuating the obesity epidemic on several levels?

When an overweight or obese doctor does venture to give advice that he or she obviously finds difficult to follow, isn’t there an underlying — and maybe even undermining — complicit wink to the patient?, i.e.,  Now that I’ve told you about healthy eating, let’s have a cookie together; we’ll change our habits tomorrow!

A hospital or private medical practice can have all the latest and greatest doo-dads, gadgetry and high-tech wizardry in the world to offer people the most superior diagnostics, treatments and cures in the world.  But, when you come right down to it, isn’t the medical community its people?  Don’t patients come to see their doctors and not machines?  Don’t they want and need help from humans?  Don’t they need and want to build relationships with doctors who can give them advice and guidance and to whom they look to as trusting role models?

Should hospitals have a responsibility to hold its physicians and nurses to a standard that encourages and exudes good health to its patients—dare I say, it’s prospects and customers?

In my experience, and I know several doctors on a personal, social level who are overweight or obese, doctors almost always choose not to seek help. It’s their own superior knowledge (and they do have superior knowledge) that gives them a know-it-all attitude which prevents them from seeking help from others, as patients seek help from them; and which allows them to ignore their own obesity-related health issues, even as they diagnose and attempt to treat those issues in patients.  They are more devoted to helping patients than they are to helping themselves.

In my experience from a business standpoint, attitudinally, doctors are the hardest clients to work with.

It is no coincidence that, in the Hopkins study I mention above, slim physicians were more confident in their ability to dispense advice about diet and exercise to heavier patients, and 72% believed that they should be models of healthy weight for their patients.

Going to medical school is hard work.  To be successful takes time, attention, planning, focus and commitment . . . for years.

Losing weight is also hard work and requires the same time, attention, planning, focus and commitment—to achieve a healthy weight and to maintain it for a lifetime.  Overweight and obese physicians who improve their own overall well-being, as well as improve their attitude toward their own weight loss or weight maintenance, will be much better able to influence the care they provide to their patients . . . including being able to prescribe behavior, not pills.