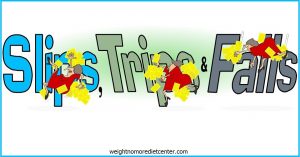 A most discouraging aspect of weight loss is the inevitable slip . . . and everyone has them. For some, the occasional slip brings about an all-out binge — followed by guilt, disgust, self-loathing, a sense of powerlessness and a feeling of “what’s the use?”

The biggest difference between successful “losers” and those who don’t isn’t whether or not they have slips. It’s how they deal with the slips when they happen.

The problem isn’t what you did, but what you make it mean.

You may tell yourself that you have no will power, that you will never succeed, that you don’t deserve to be slim and that your efforts are in vain. In other words, you want to pick up your marbles and go home.

Instead, learn to see the occasional slip as just that — a stumble that everyone takes on their path to achieving goals.

I’ll tell you the same thing I’ve been telling clients for years:

Diet slip. Get up.

“You don’t drown by falling in the water.

You drown by staying there.”

A slip doesn’t have to become a binge.