Are Your Friends Making You Fat? 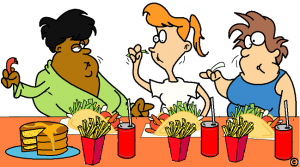 People are connected, and so their health is connected, said authors of their research findings a decade ago in The New England Journal of Medicine. It was the first time that prestigious journal published a study of how social networks affect health and, more specifically, how social networks play a powerful role in determining an individual’s chances of gaining weight.(1) (By social networks, they meant face-to-face friends, not Facebook friends!) The 32-year longitudinal Harvard study found that in some ways, obesity is like a communicable disease, spreading from person to person (a domino effect), especially friends and family.(2) The effect varied depending on the relationship:

. . . and you don’t have to be a Harvard researcher to know that the obesity epidemic has gotten way worse over the last decade, which means no doubt the percentages quoted have likely increased.

Another study done a couple years after the Harvard findings was conducted by researchers at the University of Buffalo(3). They found that fat kids consume significantly more calories when they chow down with friends who are also overweight than when they eat with lean friends.

Let’s face it, we know that one’s social circle is a strong influence on each others habits and behaviors, health or otherwise. As adults and parents, we know that if our teens fall into the crowd who smokes and drinks or does drugs, our kids are more likely to take up those behaviors. Similarly, you know that if you have a gym buddy, it ups your chances of sticking to your own workouts. You know that having a running partner keeps you accountable even when you don’t feel like tying up the laces. If your friends are going to a bar after work or not hitting the tennis courts in their free time, you are likely to fall in with them, rather than striking out on your own at a gym.

The domino-effect data is harsh but makes sense: You live, laugh and love together. Surely you eat and exercise (or not) together too. Therefore, the fact is: Your best friend could be your worst enemy. This is not an out to rationalize your over-weight or obesity. It is, however, a matter of recognizing the role and influence friends play in your health and habits.

It’s also a matter of recognizing the role and influence your obesity plays in the health and habits of your kids: Sometimes being their best “friend” . . . isn’t! 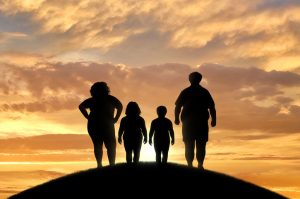 Although obesity can’t actually spread like an infectious disease, contact with other obese people does influence the likelihood of becoming overweight or obese yourself. This is because not only do friends spend a lot of time together and more often than not eat similar foods and engage in the same physical (or lack thereof) activities, but also because what you consider to be a normal and appropriate body size for yourself is oftentimes based on the weight of people around you. In other words, as those in one’s circle gain weight or become more overweight or obese, they come to think that it is OK to be bigger since those around them are bigger. This rising tide of what I like to call fat blindness changes your perception of what is a normal weight in general, but specifically in a circle of friends and family (and this is also why so many parents refuse to see their kids are fat).

It’s easy to eat dessert when there are four forks and everyone’s gorging and exclaiming how delicious it all is. It is hard to be the one person making a healthy change in a group of heavy people who like to eat (and who also don’t like to exercise). However, as Ghandi said, you must be the change you want to see in the world. Therefore, ultimately, YOU have to feel confident about saying no. In so doing, perhaps you can be a role model; perhaps you can “thinfluence” your friends to make the same healthy choices next time. Or, at the very least, you can give your friends a strong message not to wave cookies in your face or pressure you to be one of the four fork holders sharing a decadent dessert the next time you get together.

. . . and be forewarned: If you want to lose weight, too often overweight friends are not only not going to want to make changes themselves, but they also won’t support your attempts to change yourself. They are enablers, saboteurs, food pushers. Therefore, whether inside your circle or out, you need to find even just one person who wants to do what you’re doing so your own journey won’t be so isolating.

💥 All close friendships have many positive effects on our lives. 💥

I am suggesting, however, that you also form relationships with people who have healthful habits and lifestyles those who can inspire, encourage and motivate you, who you can look to as a mentor when it comes to getting and staying healthy. After all, it’s not only obesity that is socially contagious. Slimness is as well.

8 Ways Your Friends Are Sabotaging Your Weight-Loss Goals