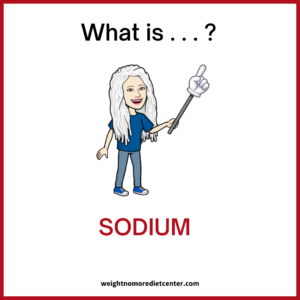 Sodium (also referred to as “dietary sodium”) is a mineral, an essential nutrient. It helps to maintain blood volume, regulate the balance of water in the cells, and keep nerves functioning. The kidneys control sodium balance by increasing or decreasing sodium in the urine. One teaspoon of salt contains about 2,300 milligrams of sodium, more than four times the amount the body requires per day!

Most Americans consume far more sodium than their bodies need. Many foods contain sodium naturally, and it is commonly added to foods during preparation or processing or as a flavoring agent. Sodium is also found in drinking water, prescription drugs, and over-the-counter medications.

In the United States, about one in four adults have elevated blood pressure. Sodium intake is only one of the factors known to affect high blood pressure, and not everyone is equally susceptible. The sensitivity to sodium seems to be very individualized. Usually, the older one is, the more sensitive one is to salt.