The Skinny on Fat Cells 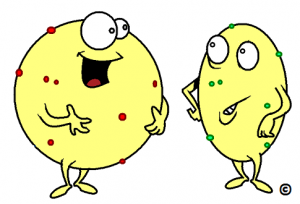 They are the building blocks of flab, the payback for cheesecake, the bloated little sacks of grease that make more of us— more than we can fit into our pants! Scorned and despised, they are sucked out surgically by the billions from bulging bellies, backs, and buttocks. And still they come.

Scientists used to think fat cells were pretty much just an oily storage compartment, but over the past decade research has shown that fat cells are actually little chemical factories, and that body fat is potent stuff: a highly active tissue that secretes hormones and other substances with profound and oftentimes harmful effects on metabolism, weight and overall health. In recent years, biologists have begun calling fat an “endocrine organ,” comparing it to glands such as the thyroid and pituitary, both of which also release hormones straight into the bloodstream. But, unlike those other glands, fat has a seemingly infinite capacity to make more of it. Too much body fat can act like a poison, spewing out substances that contribute to diabetes, heart disease, high blood pressure, stroke and other illnesses, including some cancers.

When we “lose weight,” what actually happens is that we burn fat stored within our cells, the amount of fat in the cells decrease and the fat cells simply shrink in volume. A lean adult has about 40 billion fat cells. An obese adult not only has at least two to three times that many, but their fat cells are much larger than the cells in lean adults. Even worse, the body can always make more. Through severe and prolonged obesity, when all present fat cells are filled to capacity, new fat cells can continue to be created in order to provide additional storage. A severely obese individual can have as many as 300 billion fat cells!

Our total number of fat cells are both subcutaneous fat cells and visceral fat cells. Subcutaneous means they’re right under the skin, surrounding the body; this is the fat you can see when you look in the mirror. Visceral fat refers to the fat located deeper within the body, inside the abdomen. Anybody with a belly has visceral fat, and the more you have, the worse off you are. Visceral fat is more active, spews out more toxic substances, and its secretions go straight to the liver and interferes with its functions, which include helping to regulate blood glucose and cholesterol.

There are no quick fixes to ridding the body of fat cells. (For anyone who thinks liposuction is the answer, think again: Liposuction only removes subcutaneous fat which has no affect whatsoever on health. It is not a weight loss strategy.) Weight loss through proper diet and exercise, however, is the only way to rid oneself of visceral fat and shrink those cells. Nothing else will do it. This will almost always result in significant changes in blood pressure, cholesterol and insulin resistance.

The number of fat cells you possess will influence how difficult it will be for you to lose body fat. But no matter how many fat cells we have we all have the physical potential to reduce our body fat. For some people, especially those with large numbers of fat cells, it may just take more time. But losing weight now—TODAY— can put an immediate stop to any potential increase in your fat cell numbers.

What are you weighting for?

I am passionate about helping my clients become (and stay!) slim and healthy. I write and release weekly blogs and podcasts to educate, motivate, inform and inspire on all issues related to weight loss, obesity, health, wellness, diet and lifestyle. To learn more about who we are and what we do, please read the Services and Programs pages, with particular emphasis on The Client, The Fees and The FAQs.
© 2021 Weight*No*More℠ Diet Center. All Rights Reserved.
Theme By: Migman Media, LLC.